'I always want to know more about the people I meet in life.'
By Josh Jarman

But when the time came for a change, the then 45-year-old photographer/reporter made a huge career shift and joined his 19-year-old son, Logan, in school to become a registered nurse.

For father and son, going to school together proved to be a challenging yet rewarding new adventure in life – a shared opportunity to make a difference in the world. 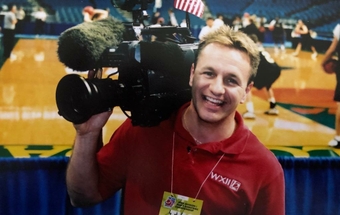 Larry grew up in a mobile home community with his parents and two siblings in Slatington, Pennsylvania, about 70 miles north of Philadelphia. It was there that he wore hand-me-down clothing and spent most of his free time after school helping his dad on construction jobs for extra cash.

“I didn’t mind getting picked on at school for being poor,” he said. “I respected the daylights out of my dad. He taught me how to work hard and that losing was never an option.”

His positive outlook and relentless desire to overcome the odds first became evident on the wrestling mat in middle and high school. He went on to receive a scholarship to wrestle at Clarion University and graduated from Millersville University. 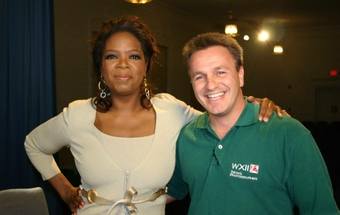 As a freshman, Larry had his heart set on owning his own business. But that all changed after a dorm room friend invited him to join him on a tour of the local television and radio station.

“I changed my major from business to broadcast journalism the very next day,” he said. “I guess I was attracted to the glitz and glamor of TV. I liked the idea of chasing down leads and telling stories.”

Larry also ended up chasing down his high school sweetheart, Tina. The couple married and moved to Winston-Salem, North Carolina, in 1988 where they had two sons, Logan and Devin. Larry went on to work for several news stations before he spent his last 13 years in the business as the chief photographer at WXII-TV, the local NBC-affiliate.

Throughout that time, he interviewed Oprah Winfrey, Maya Angelou and President Barack Obama during his re-election campaign. He also covered a number of storms, including powerful Hurricane Floyd in 1999.

Off camera things were not always so rosy. Tina was diagnosed and treated for breast cancer at Novant Health Forsyth Medical Center’s Derrick L. Davis Cancer Center. Fortunately, 15 years later, she is in complete remission. Larry recalls that was the first time in his life that he considered going into the medical field.

“That experience was extremely difficult for my family,” he said. “But I learned through it that the role of caretaker came naturally to me. I remember thinking at the time, if I ever become a nurse, I will want to treat every patient I work with like my wife.”

So, years later, it came as no surprise to Tina, when Larry shared that he was inspired by his oldest son, Logan, to go into the nursing field. 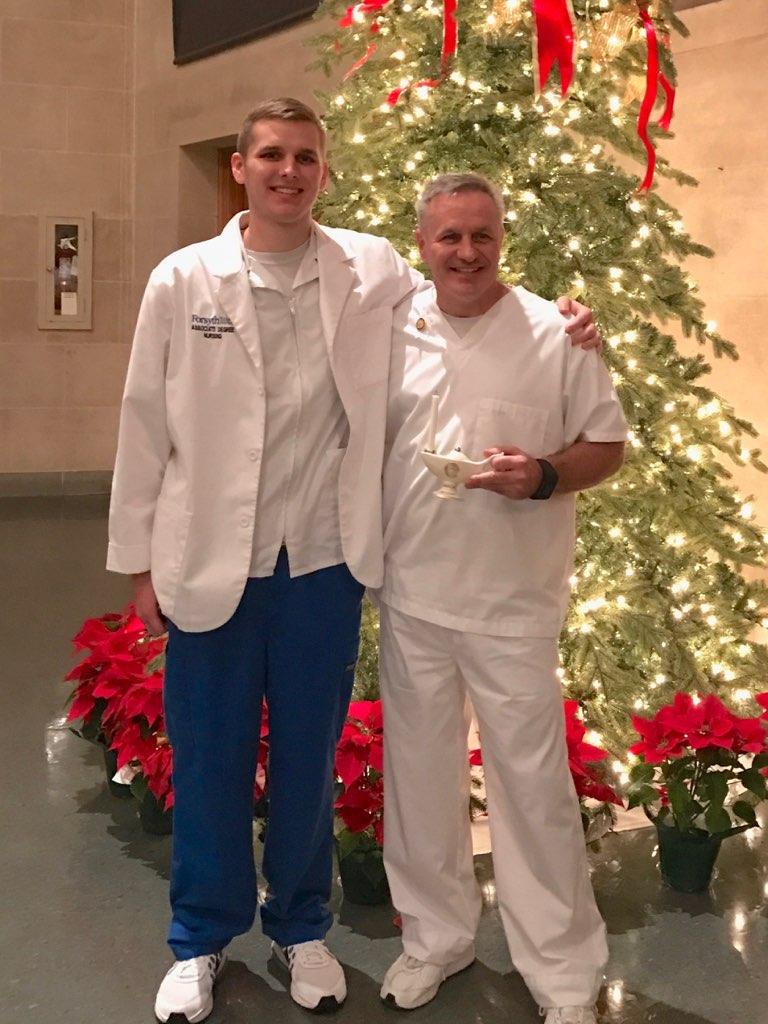 Ever the planner, Logan had just graduated from Forsyth Technical Community College on the clinical career path with his associate degree. As a certified nursing assistant (CNA), he had dreams of one day becoming a certified registered nurse anesthetist (CRNA) and working in operating rooms. Eager to accomplish his goal, he felt well-equipped to tackle every new challenge, or so he thought.

“At first, the idea of going to school with my dad was a little embarrassing and awkward,” he said. “But after I got used to it, I actually thought it was kind of cool. Being able to have your dad right there with you as someone who can truly relate to the challenges you are facing made life a bit less stressful.”

The most challenging part for Larry was learning to be a student again. “Going back to school at any age can be tough,” he shared. “I had to go back and redevelop those study habits.”

Since Logan was still living at home, the nursing students often carpooled to class and studied for exams together. Tina, who banned “nurse talk” from the dinner table, jokes that she went from having no nurses in the family to two overnight. Fortunately, all of their hard work paid off when both Larry and Logan went on to graduate from Forsyth Technical Community College as registered nurses in 2016 and 2017 respectively.

“I’ve found some similarities between nursing and television,” said Larry. “Every patient is a person and every person has a story to tell. Of course, I want to know what is going on with my patients from a medical perspective, but also just as fellow human beings. I always want to know more about the people I meet in life.”

All in the family 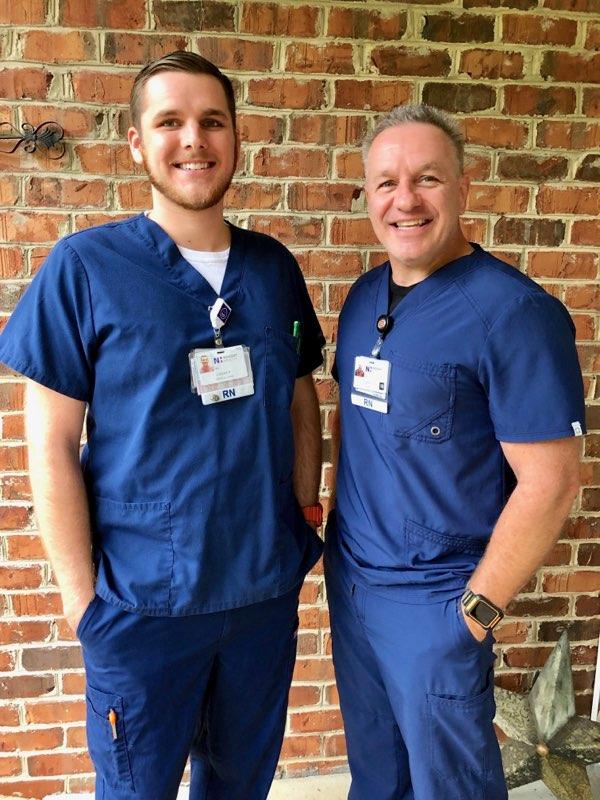 Today, Logan works on the neuro intensive care unit (ICU) at Novant Health Forsyth Medical Center. He also serves on the rapid response team for stroke patients and he plans to eventually go back to school to complete his CRNA training. Not to be outdone, his dad proudly works just down the road on the orthopedic medical-surgery floor of Novant Health Clemmons Medical Center. He also helps new staff during orientation and fills in from time to time as the nursing house supervisor.

“I’m grateful for the second chance I have been given at life,” said Larry. “My wife was given a second chance and now I have been given a second chance with a new career. I don’t think many people find a second profession in life that they truly love more than their first one. But, I have found that in nursing. I’d like to say that this experience has brought me closer to Logan, but the truth is, we have always been close. I tell both of my sons, never settle and always be the best you can be.”

When asked what he still wants to accomplish in life, Larry said, “At 51, I’m only two years into on my new medical career. So, as a rookie, I want to use the time I have left to work alongside my son and to do the very best job I can for my patients, for my family and for the world.”

Said Logan: “He’s a great father, role model, nurse and an all-around wonderful person who I’m glad to be able to call my dad.”