After suicide attempt, college student gets the help she needs

Priscila Sosa Cruz has struggled with depression most of her young life.

In school, the Winston-Salem woman said she always felt different from the other kids. They seemed happier than her, but she could never quite figure out why. She began cutting herself in middle school, though she was careful to hide the cuts under clothing. And her struggles would continue.

In September 2017, it all became too much. Priscila, now 19, took a whole bottle of an over-the-counter medicine she used for migraines.

“It was a decision I made knowing what I was doing,” Priscila said. “I did stare at the bottle and think, ‘Is this what you want to do right now?’ And I answered, ‘Yes.’”

Priscila began shaking and turned cold and pale after taking the pills. It was so noticeable her emotional support dog, Koko, started whimpering. She wasn’t going to say anything, but the thought of leaving Koko alone was too devastating to bear. When her mother asked her what was wrong, she blurted out the truth.

The suicide rate in the U.S. has seen a steady rise each year over the past decade. On average, 112 Americans die by suicide each day. And more than 16 million adults in the U.S. have experienced depression, including more than one-third who did not receive treatment.

The decision to get help

Priscila went to her therapist, Melissa Carmona, at the Community Care Center of Forsyth County Inc., a free health clinic in Winston-Salem that receives funding from the Novant Health Forsyth Medical Center Foundation and others. Carmona talked Priscila into having her mom drive her to Novant Health Forsyth Medical Center, where she was admitted.

Priscila said she had made some similar suicide attempts in the past but with fewer pills and this was the first time she was hospitalized for an acute crisis. She spent a week in the behavioral health unit and received a new medication, an antidepressant, to help her manage her depression.

It’s important to note that Priscila’s journey wasn’t over when she was discharged. She was connected with Jennifer Hanopole, a physician assistant with Novant Health Psychiatric Medicine, who specializes in telepsychiatry. Priscila was able to meet with Hanopole remotely via a video screen at the Community Care Center where she also received her medications. She would also continue to see her therapist — the two had developed a strong relationship.

Novant Health, with funds from its foundation, is now in its second year of providing Community Care Center with free telepsychiatry services, which reduces unnecessary emergency room visits and helps patients avoid acute crises and have better long-term care.

Although she’d felt depression and anxiety for years, Priscila waited until she turned 18 (not long before her suicide attempt) to see a therapist for the first time because she didn’t want to involve family.

While stigmas widely surround mental health, it presents a particular problem for Latinos. Only 20 percent of Latinos with a mental disorder discuss their symptoms with a doctor and just 10 percent get treatment.

“There’s this sense in the (Hispanic) community that, I need to just shake it off,” said Carmona, also Latina. “Because of the heavy influence of religion in our culture, a lot of people would rather go to church — which can be a huge support system — but if we’re talking about people who are clinically mentally ill, it’s simply not enough.”

Discussing her mental health with family has always been challenging, Priscila said. But she’s started to be more open so they can talk about it at home.

The support from her care providers has been critical to her progress. “I feel like I finally have some professional and emotional support … I’m slowly but surely making my own little place,” she said.

Hanopole said Priscila’s suicide attempt could have been prevented had she felt more comfortable getting care earlier. It’s a lesson everyone should heed, she said. “The longer you go without seeking out treatment, the more likely you are to have a suicide attempt or recurrence and it’s harder to treat,” Hanopole said. “If you have symptoms that are lasting longer than two weeks you should talk to your health provider.”

In addition to being part of a minority group,Priscila identifies as bisexual and gender fluid, which means not identifying with a fixed gender of male or female.

Depression and other mental health conditions are far more common among LGBTQ youth, although Priscila said she recalls depression symptoms years before she came out. As a teenager, she said she was sexually assaulted. Carmona is helping her work through that, as well.

“It wasn’t just one thing going on,” Carmona said. “It was just years and years of not only struggling with depression but also feeling like ‘the other’ (an outsider) in so many ways.” 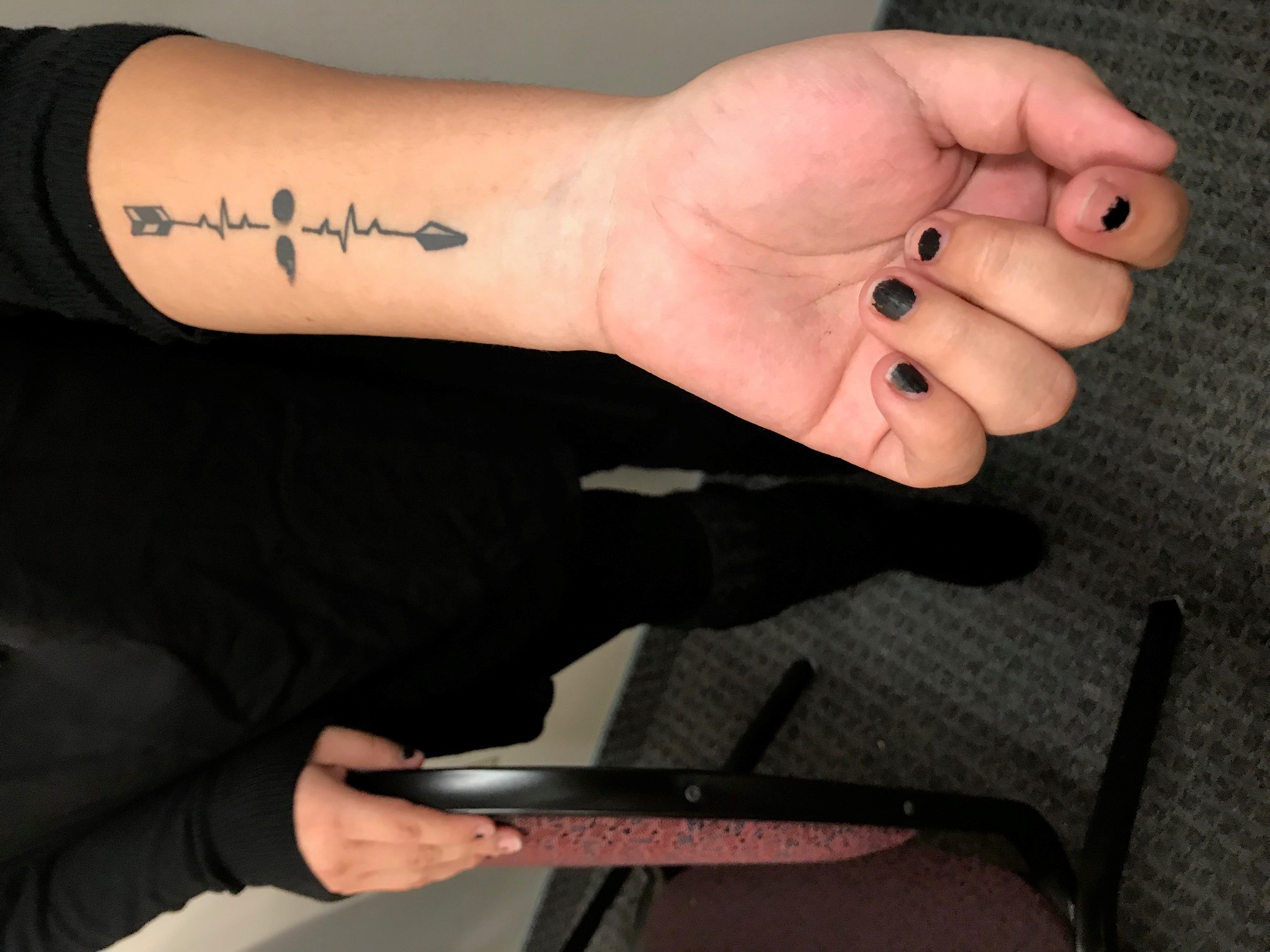 Sosa Cruz's tattoo from after her time in the hospital symbolizes life continuing after a suicide attempt.

Making the most out of a second chance

For a high school writing assignment, Priscila once went a step further and kept on writing and eventually self-published a book.

Now, she has a chance to compose a new chapter for herself.

She praises her time so far at Salem College, where she’s a first-generation college student triple-majoring in communications, English and creative writing. Priscila said the administration has been highly supportive as she's taken a year leave, with plans to resume classes in the spring of 2020.

She loves spending time with Koko, her Chihuahua and miniature pinscher mix that helped her get through some of her worst days. She also has found coworkers who treat her like family in her current jobs as a program coordinator for the YMCA of Northwest North Carolina’s Latino Achievers and a liaison for Crosby Scholars. In those roles, she gets to help other young people overcome their own challenges.

Priscila also has a new tattoo that features a semicolon and a lifeline running through it. “The semi colon is used where you could have put a period,” Priscila said. “The lifeline could have ended but it continued.”

Depression can happen at any time. Licensed therapists at Novant Health are available around the clock to help by calling our behavioral health call center. Call toll-free 1-800-786-1585 if you are in the Charlotte area or 1-800-718-3550 if you are in the Winston-Salem area. If you think you may hurt yourself or someone else, call 911 immediately or go to the nearest emergency room. If you think you may be suffering from depression, please talk with your doctor. Click here to find a provider near you.

Why Novant Health screens all patients for depression

Coping with mental health emergencies in the ER