COVID nurse, 22, is in a world seasoned colleagues never imagined

Fresh out of nursing school at 22, Aiyana Coward has been on the job as a nurse at Novant Health Presbyterian Medical Center for just a couple of months. But she’s already seen things that nurses who’ve been caring for the sick for 40 years have never experienced.

Still just weeks into the job in late April, she perched bedside with her training nurse as a family sang to their father – a retired truck driver who once logged a million miles without an accident. As McArthur Mackey took his final breaths, the family gazed into the room via the internet from their laptops and phones from around the country and joined together to sing “I’ll Fly Away.”

“Everyone was crying,” Coward recalls. And she teared up with them. Nursing school gave plenty of instruction on how to work with families. But nothing like this.

“I’m definitely stronger than I thought I was,” said Coward. That’s the kind of thing you learn when you start your career in intensive care unit during the COVID-19 pandemic. “I love critical care, and how much you have to do for the patients. They basically need your help to survive.”

As losses mount across the U.S. – some 90,000 people have lost their lives to COVID-19 – the pandemic also presents an unprecedented training opportunity for a new generation of nurses, the backbone of the American health care system.

As Novant Health leaders raced to prepare for possible shortages of PPE (protective personal equipment,) it was initially decided that to preserve supplies, young new hires like Coward would not enter patient rooms.

But ICU nurse manager Cindy Little pushed back. Raising concerns and asking questions is a core value at at Novant Health. “We said, ‘We’ve got to get them into those rooms. We don’t know when the next pandemic is going to occur and we’ve got to get them educated,’” Little said. 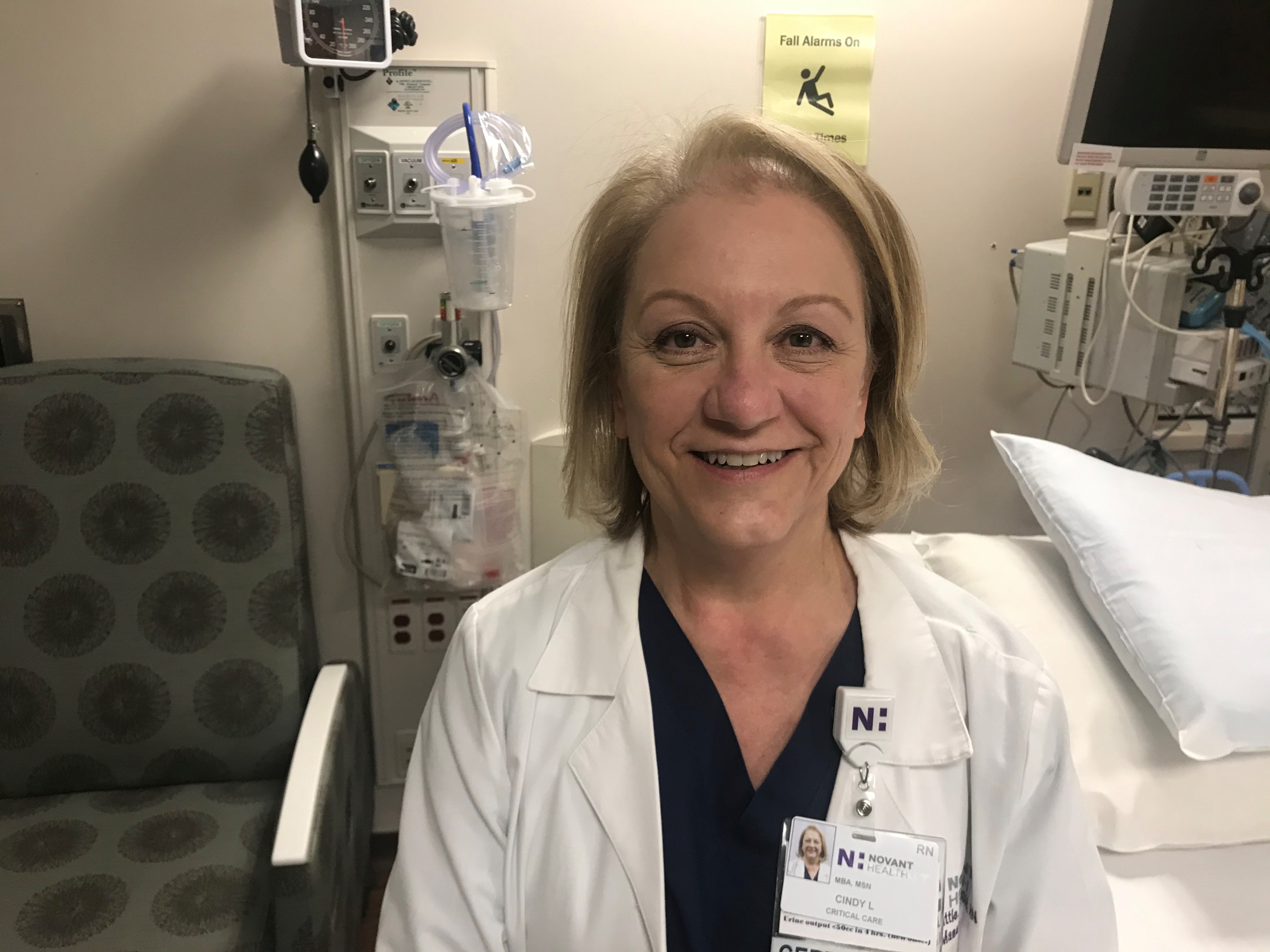 The ICU is a trial-by-fire training ground, and often a steppingstone for nurse practitioners who diagnose conditions and can order prescriptions. It also attracts gung-ho nurses eager to advance their training and career.

“Nothing in nursing is as intense as this,” Little said.  “We’re looking for someone who is a thinker, always asking questions: ‘Why is this the treatment of choice?’ “We don’t want someone who’s going to accept the physician’s order and that’s it. They have to have an appetite for learning."

A ‘Presby Baby’ reports to work

Aiyana Coward is a “Presby Baby,” a Charlotte phrase for people born at Presbyterian Medical Center, where she works today. (Her first name is pronounced, i-YANA. It’s a Native American name given in honor of ancestors.)

She studied nursing at East Carolina University and paid her way through school helping lease apartment complex units and working as a certified nursing assistant bathing patients, changing beds and learning the fundamentals of patient care. At Novant Health, she was accepted to the highly competitive nurse residency program that smooths the transition from classroom to real-life patient care. The program offers extra support to the cream of crop job hires to help them off to a strong start and boost their chances of staying in a field facing severe shortages.

Coward graduated school in December 2019 and kept her job as a leasing consultant until starting in the ICU in early March. She moved back into her parents’ house to save money, unpacked her boxes and then walked into the middle of a worldwide pandemic. 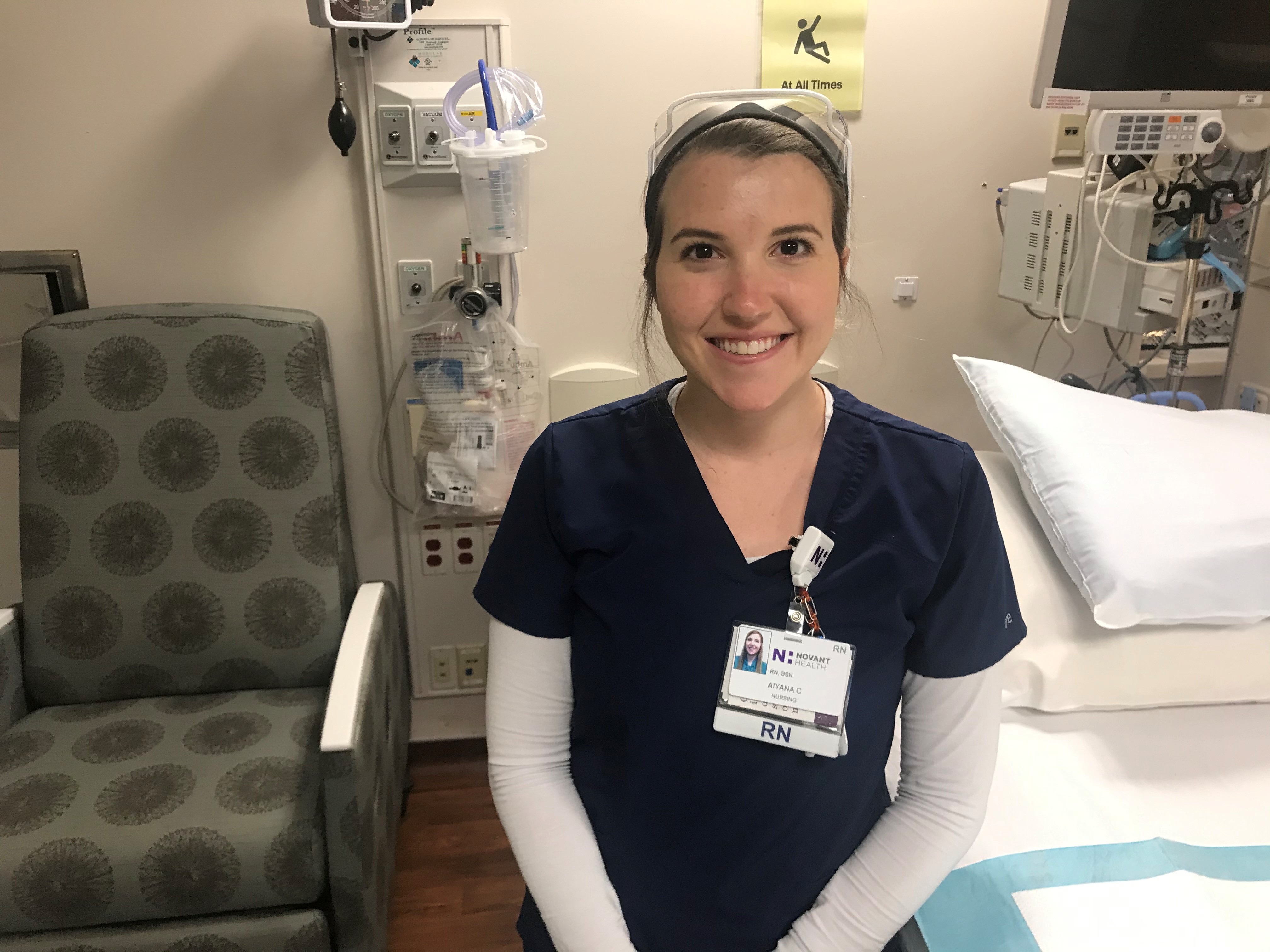 She wasn’t quite sure what to expect. Of course, no one was. “At first a I was a little hesitant,” she said. A lot of people were. Parents of some young nurses have begged them to quit, even offering to cover the loss of their child’s wages out of their own pockets, Little said. Anything to get the nurses from working the unit where one patient COVID-19 after another lies sedated, connected to machines that keep them alive.

But Coward found little time for fretting as she waded in. And now, she said, “I wouldn’t have it any other way.”

Help every step of the way.

Coward has entered a complex, high-stress new world – but she is not on her own. At her side is her training nurse, or preceptor, Cassie Brault, 25. 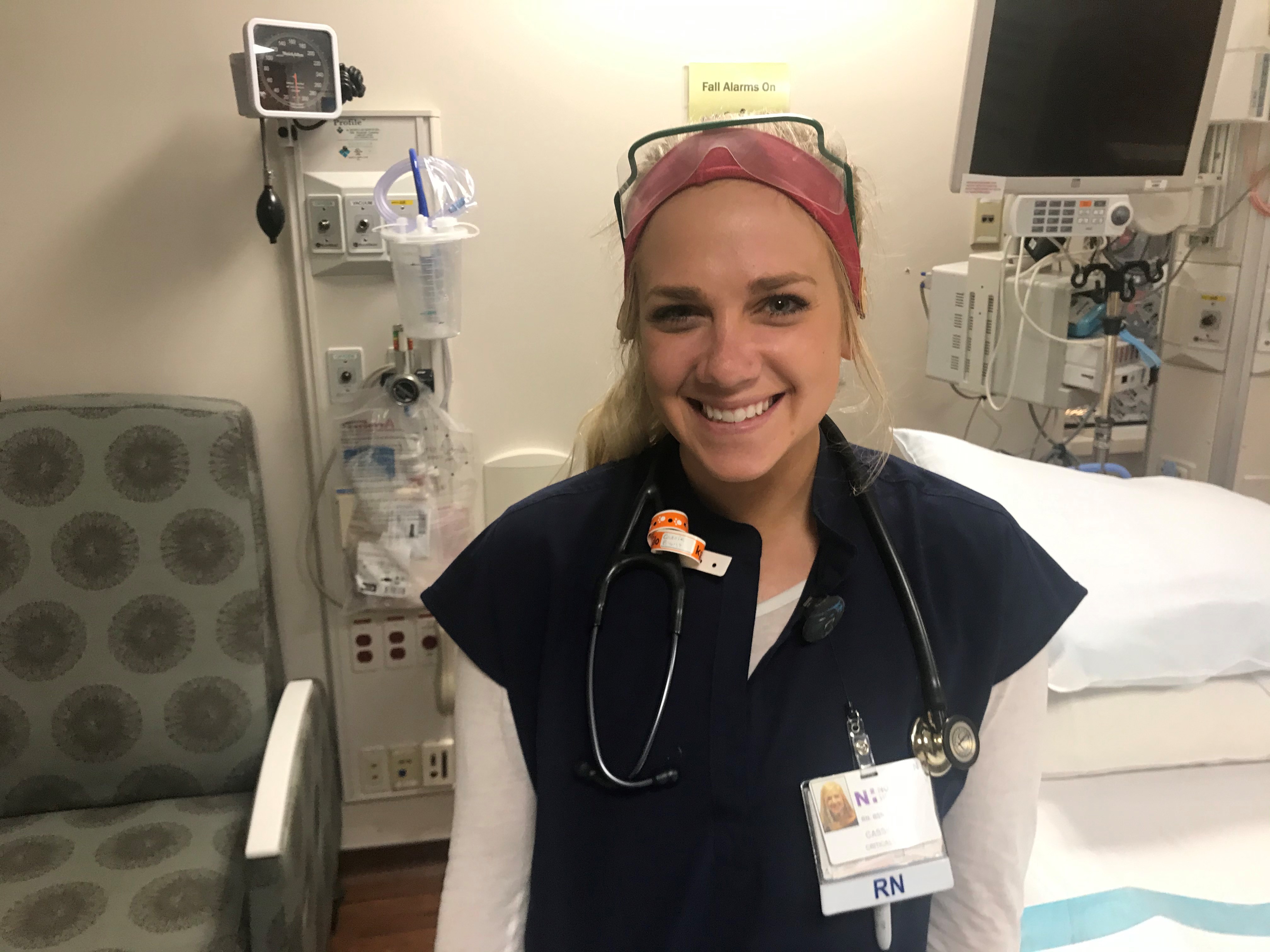 Brault remembers her early days in the ICU. The 12-hour shift can be grueling – filled with constant decisions, working with a mix of  doctors, mastering ever-evolving technology and caring for profoundly ill patients. After work, self-doubt would bubble up and she’d call her mother in tears. “I just can’t do it!” she’d tell her mom. “I’ll never be able to handle this.”

But she had a preceptor, too, who told Brault:  “Stop worrying. One day this will all click.” And the one day, it all came together for Brault. “I was so excited. I was ready to come to work and take care of all these sick patients. And I want that for Aiyana, too.” Brault relays the story in a quiet corner of the ICU. A mask hides her smile but her eyes don’t.

Coward has a ways to go, of course, Brault said. ICU nurses agree that it takes at least a couple of years to get a handle on the job. But she’s already displaying the work ethic, emotional wiring and instinct Novant Health is looking for.

“For a new grad, she’s amazing,” Brault said. Coward jumps into help others without being asked and constantly takes the initiative. And there’s the little things. She loves that Coward charts her patients’ conditions while standing in their room to catch every detail, rather than going out to nurses’ station and sitting down. “It’s a good habit,” Brault said.

One of the toughest parts of the job can be rounding with a doctor and other team members. “The nurse is in the spotlight for a few minutes,” Brault said, and it can be tough when a physician is probing away with questions. “She needs to learn to show her confidence,” Brault said. “I’m not worried, she’s already getting better.”

McArthur Mackey grew up one of 13 children and worked as a truck driver for Family Dollar. As his children grew up and spread across the U.S, he constantly emphasized the importance of staying in touch with each other and advocating for family reunions, said son Wayne Winfield, of Lancaster, South Carolina, just south of Charlotte.

Winfield – a truck driver, just like his father – said his dad called him one day in late March and said his sinuses were hurting. He soon started feeling worse and was admitted to a hospital in Lancaster on March 28.

Two days later, Winfield’s phone rang while he was on the job. It was the hospital. His father tested positive for COVID-19. Winfield was stunned. “I said please ma’am, I have to pull over.” He stopped the truck and sat there in disbelief. “It was like a dream. I’d seen it on TV, but never dreamed my dad would get that stuff.”

His father’s condition declined and the two talked on Easter night.

“He said, he felt like this was it. That he wasn’t going to be able to see me anymore. And that he loved me. He said, ‘Whatever happens from here, I want you to make sure Crawford (a funeral home) gets my body.” Then he told his son where to find the suit he always looked good in. They never spoke again.

The next day, April 13, his dad was transferred to Presbyterian and taken to the floor where Coward, Cassie Brault and Cindy Little work.

McArthur Mackey’s condition worsened over the following days and doctors started to prepare the family for the fact that their dad would not recover. He made it clear to his children that he did not want extraordinary circumstances taken to keep him alive if it was clear his time had come. And as he continued to slip away, his family from around the country gathered around their devices in their living rooms and kitchens to say goodbye to the man they called “Pop.”

The nurses opened a Zoom meeting from a laptop. And as McArthur Mackey’s image came into view a bit of relief flooded Winfield. “I was able to lay eyes on him again, it was the first time in 30 days.” Coward and Brault were there with his dad. The family spent the next hour talking and trying to let him know they were there, even though he was sedated and not showing reaction. But doctors and nurses regularly tell family – and each other – that patients can still often hear and comprehend what’s said around them. The family shared stories and memories with their dad as other relatives hopped on the call.

The children decided their dad should spend his final moment without the ventilator and a tube down his throat. They wanted to see his face, unobscured, one final time.

Coward and Brault flipped the laptop around so the camera faced away. The procedure, called an extubation, can be a difficult thing for family to watch. They neatened his appearance and swiveled the laptop back into position. Then a cousin named Thurman slowly launched into “I’ll Fly Away,” a gospel tune from 1929.

The rest of the family joined in, some crying. Brault and Coward teared up as they held their patient’s hand. McArthur died moments later.

Today, Winfield said he was grateful for the chance to say goodbye in a remote call, and that he appreciates the nurses being at their dad’s side as he passed. He also offered thanks to the physicians for complying with his wishes to “give it to us straight.”

He said the online gathering also fulfilled a final wish of sorts for his dad: The family was all together again. And several of them are in touch a lot more these days.

It was a powerful moment for Coward, too. It was her first extubation. Respiratory therapists usually handle the procedure, but sometimes ICU nurses have been handling that to reduce exposure to the team.

It was one more experience for her that nurses three times her age have never done themselves.

Coward’s days in the ICU are coming to a close as she prepares to rotate to another Novant Health hospital and another kind of care as her residency requires.

Her resilience – and her confidence – are building by the day. 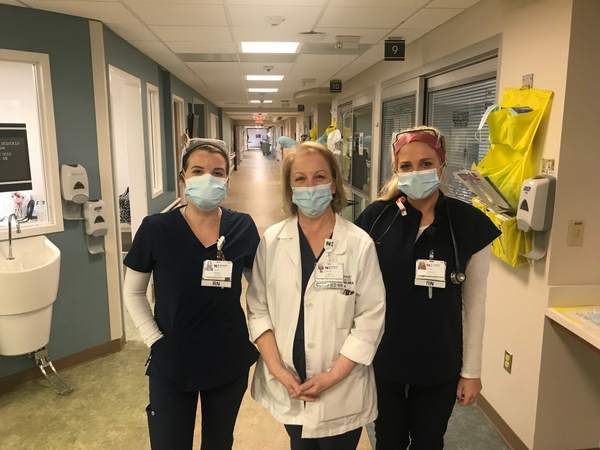