You might assume that nurse manager Jennifer Payne is shocked to have nine of the nurses and Certified Nursing Assistants (CNAs) on her team – 12% of her workforce – pregnant at the same time. But it’s déjà vu for her.

In 2006 – Payne’s first year as a Novant Health labor and delivery nurse – she was one of eight nurses in her unit to be pregnant at the same time. In fact, she gave birth to her first child – a son named Mason – at Novant Health Rowan Medical Center in Salisbury, North Carolina one year to the day of her start date as a new nurse: June 12.

Still, it felt a little unusual after the third or fourth nurse scheduled a meeting with Payne, who oversees the women’s and post-surgical units at Rowan Medical Center to announce her pregnancy – and upcoming maternity leave. 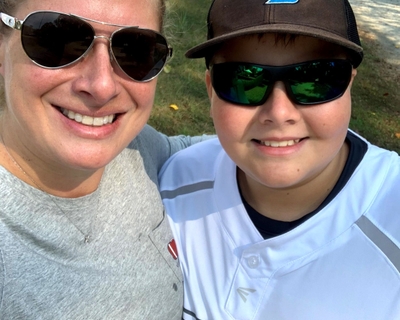 “They just kept coming out of the woodwork,” she recalled. “‘I’m pregnant,’ ‘I’m pregnant, ‘I’m pregnant.’ By the third one, I thought: Oh my, goodness. How in the world am I going to staff both units this summer?”

Payne is happy for any expectant mom, but these nine pregnancies – with due dates within seven months of each other – meant she needed to scramble. The Rowan maternity unit staff delivers, on average, 750 babies every year. Payne has hired traveling nurses – something she’s never had to do – to ease the, um, labor shortage. And since she knows how the ropes, she said she’ll fill in in the delivery room, if need be.

The team members and their delivery (or due) dates are:

Kayla Loftin has helped deliver many babies in her two years as a labor and delivery nurse, but she’s having her first. Her daughter – the only girl among the nine – is scheduled to be delivered by C-section May 10 at Rowan Medical Center. Riley has been in the breech position throughout Loftin’s pregnancy, which necessitates the C-section. 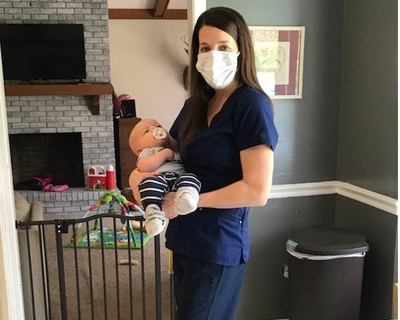 Kristin Ogg gave birth to her son in December

“It’s been so much fun for all of to be expecting at the same time,” she said. “We all compare how we’re feeling, and everyone has been so helpful – telling me what I’ll need and what I really won’t need.”

Before she went public with her pregnancy, Loftin watched as one of her teammates … and then another … and then another announced theirs. “Some nurses were announcing their pregnancies on Facebook,” she said. “One day, there were two Facebook announcements on the same day. And I thought: Oh, my gosh. Me, too.”

Railei Love, a Family Care Center CNA, was one of the first to announce her pregnancy. She delivered her firstborn – a son, Silas – a couple of weeks early and had, after 18 hours of labor and a chorioamnionitis infection, an unexpected C-section. At least she was able to deliver in familiar surroundings – the maternity wing where she works.

Being pregnant at the same time as a posse of co-workers made for memorable conversations. “We shared stories and talked about baby names a lot,” she said. “It was fun – but I was concerned for Jennifer’s sake about staffing.”

Since Love takes care of babies for a living, she must be a pro at the new mom thing, right? “Well,” she said. “At first, I thought my background would be helpful. But I only know how to take care of babies temporarily. It’s a whole different thing when it’s your own.”

It’s been an adjustment, she said, but she has a great support system, including her husband (who changes diapers and handles nighttime feedings), mom and mother-in-law. And of course, she hears from all her colleagues, either still pregnant or newly delivered, regularly.

The most important delivery? Yours.

April Fowler, who works in the post-surgical unit, is due June 2 with her fourth child. Like (almost) everyone else in Payne’s units, she’s expecting a boy.

While motherhood is nothing new, she said this pregnancy is different. “I had my other kids when I was in my early 20s,” she said. “They’re teenagers now. Being pregnant at 35 is tiring.”

But she’ll have the benefit of built-in babysitters. She has two boys and a girl already, and her daughter is especially thrilled about a new baby in the family. “She’s already named it ‘her’ baby,” Fowler said. “No one else is going to baby-sit him, she says. They’ll have to go through her first.”

Fowler and her fiancé are keeping the name of their son a secret until he’s born. For now, they refer to him as “Little Nugget.”

As the mom of (almost) four, Fowler is in a position to dispense advice to first-timers. But she doesn’t. All she’ll say is: “Everyone is nervous about motherhood. But it will come naturally. If you’re nervous, then you’re already a good mother.”

There is one bit of advice she doesn’t mind doling it – but it’s not about parenting. It’s about self-care. “I tell new moms that there is nothing wrong with making time for themselves. Motherhood is exhausting. Having a newborn is exhausting.”

She and her fiancé plan to nest as a family for the first few days after “Little Nugget” is born. “We’re not going to have visitors, except for my mom and my fiancé‘s parents, for a week or so. It’s hard to get rest in a hospital. You have to wait until you get home for that. And when you come home, you just want to enjoy your baby and your family time.”

She’ll be ready soon enough for “Little Nugget” to meet his extended family and friends. For a few days, she’ll savor the sweetness and newness of being a family of six. This is her fiancé’s first child and the first grandchild on his side of the family, and he’s “over the moon,” she said.

Everyone’s been making jokes about what’s in the water at Rowan Medical Center. But several of the pregnant nurses say there’s nothing magic about what’s coming out of the tap. They do point to all that time confined at home during the pandemic as a common denominator.

Fowler noted that all the babies she and her colleagues are having are “COVID babies.” These nurses have decided their nine newborns – enough for a baseball team – should have a motto: “We’re proof our parents didn’t socially distance during the pandemic.”

She was a special delivery in the midst of coronavirus