3 recipes that celebrate the incredible foods of Native America

As part of Native American Heritage month, Novant Health celebrates the contributions native people have made to our diets. Some 60% of the food consumed globally today has ties to foods that Europeans encountered in what became North America. According to the Journal of Ethnic Foods: “It was not long until the new foods from the Americas were introduced around the world and corn, potatoes, new varieties of beans and squashes, peppers and tomatoes, and many other foods were rapidly accepted into the cuisines of the entire world.” (Note: 3 recipes follow this story at the bottom.)

While the traditional Native American diet was extremely healthy, today Native Americans have some of the highest rates of diabetes, heart disease, and other chronic conditions in the U.S. Why? In many cases, when indigenous peoples were pushed off their lands by settlers or governments, they lost access to their traditional foods. Many on reservations were forced to rely on government-provided supplies such as white flour, canned meats and lard.

“Conflict with the U.S. government and racial discrimination have compromised the culture, traditional lifeways, and wellness of American Indians and Alaska Natives,” says the Centers for Disease Control and Prevention. ”These challenges have contributed to poverty, unemployment, and poor housing — factors often associated with poor health behaviors and disease management.”

Wild rice and quinoa can be substituted in nearly any dish that uses rice. Chia seeds are even more nutrient-dense. Two tablespoons of chia seeds contains 11 grams fiber, 4 grams protein and 9 grams fat - 5 grams are omega-3 fatty acids which are extremely good for a number of health conditions, including heart disease. Chia seeds can easily be added to baked goods like breads and muffins, smoothies and oatmeal.

All of these foods are easy to cook and can be combined into some very tasty and healthy dishes. To begin, try just substituting one native ingredient into your own recipes or search the web for other health recipes. Here is a cookbook of heart healthy native recipes offered by the National Heart, Lung and Blood Institute, https://www.nhlbi.nih.gov/health/educational/healthdisp/pdf/recipes/Recipes-Native-American.pdf. In addition, here are some health Native American-inspired recipes.

Rebecca Souza is a facilitator for diversity, inclusion, and equity in Novant Health corporate pharmacy and is chair of the Native American Business Resource Group. She is not Native American, but has studied their cultures, traditional diets, and their health issues as part of her degrees in public health and medical anthropology. 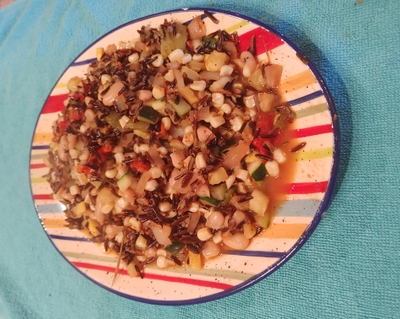 This is inspired by a traditional recipe.

*Note: if you prefer a firmer squash, do not add squash here. Sauté the squash for five minutes, turning at least once and add with onions.

The American Indians popped corn over fires. The Northeastern tribes, such as Iroquois, added maple syrup for a sweet treat. The Cherokee and many other tribes added honey.

Note: this recipe is a great one for kids to help make.

Freshly popped, still-hot popcorn – you may air pop it or pop it in a pan with oil (make certain to use the lid). Microwave popcorn may not work as well.

The Hidatsa are a Plains Indian tribe. This recipe is very similar to one they would have used. It is a fantastic autumn recipe.