What helped “Paw Paw” thrive after heart and aorta repairs?
By Cliff Mehrtens

Richard Miller loves keeping a fleet of eight church day care buses rolling. The 150 or so kids who daily see him behind the wheel affectionately call him “Paw Paw.”

But his future of sticking with that routine came into question after serious health problems required the unusual step of two major cardiovascular surgeries within a month.

Miller, 73, had triple bypass surgery to repair three blockages in the arteries leading to his heart in 2018.

Both surgeries are fairly common, but it’s rare that they happen in such a short time frame. And in Miller’s case, if his heart blockages hadn’t been discovered and fixed, the aneurysm repair attempt could have been disastrous.

“They told me that if I had gone in for the aorta surgery and they hadn’t known about the heart, I would have died on the operating table,” Miller said.

Miller had lived several years knowing he had an aortic aneurysm, a balloon-like bulge that potentially could affect the artery leading to his kidneys. (In medical terms, it was classified as a juxtarenal abdominal aortic aneurysm.)

It didn’t limit Miller’s daily activity, but when the aneurysm grew too large, surgery to repair it became necessary before it ruptured.

As a U.S. Army veteran, Miller was being monitored by Veterans Affairs (VA) doctors in Salisbury, North Carolina. The VA, however, wasn’t equipped to perform the surgery, Miller was told, because of the involvement of the renal arteries in his aneurysm, which increased the complexity.

He was referred to Novant Health, where Miller’s pre-surgery evaluation revealed myocardial ischemia, which is reduced blood flow to the heart. It prevents the heart muscle from receiving enough oxygen.

Suddenly, the aneurysm surgery had to be postponed because Miller’s heart was likely too weak to withstand it. Instead, Miller underwent triple bypass surgery in July 2018, as surgeon Dr. Philip Seibel of the Novant Health Heart & Vascular Institute in Charlotte, North Carolina, repaired his heart blockages. He spent a week recovering at Novant Health Presbyterian Medical Center.

“It is not unusual for patients to need heart procedures before other surgeries,” Kelso said. “Often that can be done with stents or some require open heart surgery (like Miller’s). But to have two back-to-back major cardiovascular surgeries like his is more uncommon.”

Heart bypass surgery is done about 200,000 times each year in the U.S, according to the National Institutes of Health. About 45,000 surgeries to repair abdominal aortic aneurysms are performed annually. AAAs are four to six times more common in men than in women, according to published studies.

Kelso said Miller’s demeanor and positivity enhanced his recovery in both surgeries.

“About five weeks after the second surgery, Dr. Kelso told me I can do whatever I want to do now,” Miller said. “From the first time we went to Novant Health, everything fell right into place. They had everything ready each time we went there. Dr. Kelso showed me what she was going to do before she did it.”

Miller is familiar with aneurysms and has been wary since learning he had one. His father also had an abdominal aortic aneurysm and died when it ruptured. 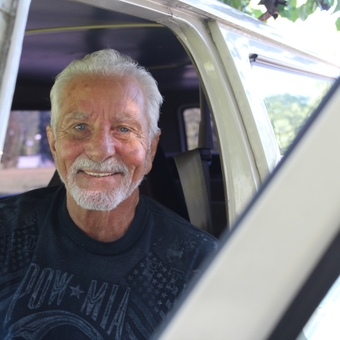 Miller was more fortunate. He has enthusiastically returned to his roles at Assembly of Faith Christian Childcare Center in Dallas, North Carolina – driver, mechanic and being Paw Paw. “I like doing this and I want to be here a long time. I have too many people to aggravate,” he said, laughing.

Miller keeps the fleet of eight vans in top shape. Two are on the road each weekday morning, and all eight roll during the afternoon. Miller drives one of them. He also attends church every Wednesday and Sunday, and the other days he heads to a gym for a workout.

His wife, Cathy, has worked in the center’s nursery for 11 years. Miller’s been there eight years. On a recent spring morning, his son and daughter – in different cars – stopped in the parking lot to say hello.

Miller said he’s looking forward to a family vacation in Georgia and visiting his brother in Maryland.

“After the heart surgery, when I went back for the aorta surgery, I was really comfortable.” he said. “I knew that after the first surgery, these Novant Health people knew what they were doing. Right now I feel fine.”

Aneurysm procedure often just means a night in the hospital