Meet the Charlotte doctor who cares for the NBA's Hornets

At a recent Thursday night game, Charlotte Hornets forward Michael Kidd-Gilchrist leaped, took a vicious foul as he was shooting and crashed hard onto the Spectrum Center floor.

Only one person among the hundreds of NBA fans in Section 104 shot out of their seat - Novant Health orthopedist Dr. Marcus Cook.

Cook's watchful eyes never left Kidd-Gilchrist, who slowly rose, grimaced and headed to shoot two free throws. The NBA game against the Sacramento Kings in mid-January carried on, as did Cook as a courtside sentinel.

He's a team physician for the ninth straight season.

He also watched over the largest gathering of basketball talent on Feb. 17, when Charlotte hosted the NBA All-Star Game. Novant Health is the official healthcare provider for the Hornets, and the title sponsor for the all-star weekend.

"We work with the training staff to care for the athletes on a daily basis in their maintenance of care and prevention of injuries," Cook said. "We also treat the athletes when they are injured."

Cook, 48, popped into the Hornets' training room about an hour before the game against Sacramento. He chatted with team trainers. Fortunately, none of the four players stretched out on nearby training tables was injured.

While the glitzy, high-definition scoreboard and flashing lights draw attention during lulls, Cook will, for example, notice a player rotating a sore wrist, shoulder or leg. A Hornets player lunged toward a rebound heading out of bounds against Sacramento. Cook knew from the player's body angle that it might compromise a hamstring. Mental note: Check on that at halftime.

"You always have to be ready," he said.

Cook's duty that night was uneventful, the way he prefers it.

"A perfect game day is boring," he said, laughing. "I don't want to be called back to the training room. I want 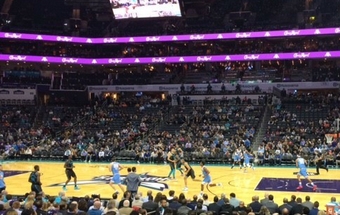 to have nobody that I need to see. I like to know that my guys are healthy and doing great. And a win is important, too."

An NBA team physician is also responsible for the opposing team and referees. Cook made a quick postgame check in Sacramento's locker room (no issues) before doubling back to the Hornets.

"Unfortunately, I've seen him a lot more than I wish I would," Hornets center Cody Zeller said, smiling. "I've had quite a few bumps and bruises throughout my career. Dr. Cook did my shoulder surgery (torn rotator cuff) a couple years ago and I've been real happy with the results."

Zeller, sidelined while he recovers from a broken hand, got a quick examination from Cook in the training room. It's pretty much the same routine a non-professional athlete would receive at Cook's Novant Health clinic on Randolph Road in Charlotte.

As an orthopedic surgeon, he’s taking care of shoulders, knees, hips, hands and feet for patients across the city.

"They both have the same kind of injuries," Cook said. "There are time constraints with a professional athlete. There is always a drive to get them back to play, back to being a valuable, productive member of the squad sooner. But they're people, too, and they need to be treated the same way." 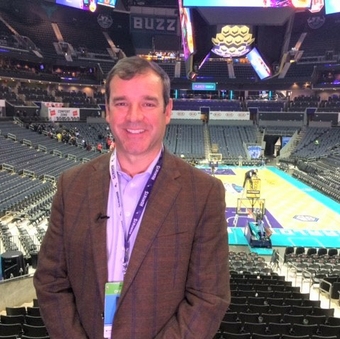 Dr. Marcus Cook has been a Charlotte Hornets team physician for nine seasons.

"Novant Health works in conjunction with the Hornets in community outreach and philanthropic endeavors, in addition to having a great relationship for care of these athletes," Cook said. "We have a liaison that's associated with Novant Health that we can call at any time day or night. They can put them in touch with a physician or get them to the hospital, assist them in any of their needs whether it's somebody's wife having a baby to somebody having an injury in off hours."

"He's just real easygoing," Seitlin said. "He doesn't get flustered. You have to enjoy it to a point where you love doing in at all hours, for example, like being called to the airport at 2 in the morning."

Cook's tall, elite clientele becomes family, in a way, as they work together to stay healthy. He was a collegiate swimmer who battled shoulder injuries, so he's been on both sides of the athlete/healthcare scale.

"I've always been fascinated with getting someone back to their pre-injury level of play," Cook said. "It's a very satisfying feeling when somebody comes back and says `Thanks for what you did. I can do what I was doing before."