Since the inception of Medical Park Hospital in 1971, the vision has always been that the patient comes first.

Dr. David Carr, a general surgeon with Novant Health Salem Surgical Associates in Winston-Salem, exclusively performs benign and oncologic breast treatments. Carr pioneered the sentinel node biopsy, MammoSite partial breast irradiation service and continues to be involved in breast cancer research in the Winston-Salem area. “Practicing at Medical Park Hospital since 1992 has been a wonderful experience,” Carr said. “It’s a complete family atmosphere of health care. Everyone works together as a close-knit unit, and the patient can sense the camaraderie of the team and high standard of care. There is no other place I’d rather practice.”

The fact that Medical Park is a surgery-only hospital is just one of many things that make it a top choice for patients having elective surgery. “Medical Park has several things going for it,” Fuller said. “One is just ease of access. Its smaller size and footprint make it attractive for both patients and providers. You can pull right in front of the building and park without navigating a parking deck. It’s very efficient.”

Need to see a doctor fast?

“But the other thing that's been borne out time and time again over the years is its commitment to excellence,” he continued. “Pick any safety and quality standard, and Medical Park excels. Whether it's Leapfrog (a hospital safety score), Centers for Medicare & Medicaid Services (CMS star rating) or Joint Commission surveys (a nonprofit that accredits more than 22,000 U.S. health care organizations and programs), Medical Park continues to lead the pack.”

There are few distractions at Medical Park. “It does one thing, and it does that one thing extremely well,” Fuller said. “The entire team is committed and fiercely patient-centric.” Despite performing a high volume of outpatient surgeries, Medical Park also performs many complex surgical cases and uses its 22 inpatient beds on a regular basis. In addition, the hospital is licensed for observation beds for patients who need to be watched following surgery – but don’t need to be admitted. 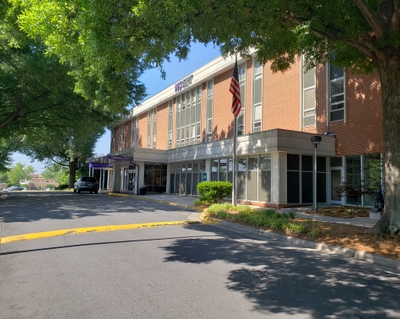 Since the inception of Medical Park Hospital in 1971, the vision has always been that the patient comes first.

Staying ahead of the curve

The patient-centered care hasn’t changed in 50 years, but nearly everything else has. The focus on minimally invasive and robotic surgery are two examples.

“Our outcomes are extremely good, and it stems from the culture,” she added. “It takes a special person to assimilate on this team.”

Ensuring a patient-centered attitude starts during the interview process. “We’ll tell candidates: “This is more than a job; we are a group of people who belongs to something bigger than ourselves,” Smith said. “It's all of us working for a common purpose and goal to provide care to achieve the best outcome we possibly can for patients.”

Fuller, the colorectal surgeon, recently took on a new role as chief clinical officer for the market. His time in the OR has diminished – he sees patients and operates one day a week – due to his leadership role.

He can’t pick a favorite from among the hospitals he helps oversee, but when asked where he’d suggest if a member of his family needed surgery, he said, “Oh, I would be very pleased if they chose Medical Park.”

Smith would not only choose Medical Park for her own surgery – she has chosen it. “When I needed surgery, I wondered: Is it fair to the team for me to come here?” she said. “Is that too hard on the team because I’m a nursing leader and they may feel added pressure? I pushed it around in my head but decided: I have to go there. The quality of the care provided at Medical Park Hospital from every discipline is truly remarkable.”

“As our 50th anniversary approaches, it is a special time to look back at our long history of highly reliable and remarkable care Medical Park Hospital provides to the community,” said Leslie Barrett, president and chief operating officer. “The legacy created five decades ago remains vibrant today and is the compass for tomorrow.”