Siblings prove to be 'more than conquerors.'
By Josh Jarman

For better or worse, it is often our families that help determine the direction we take in life.

This was certainly the case for Terrie Loflin, the radiology manager at Novant Health Thomasville Medical Center. After her brother died from a brain tumor, Loflin was inspired to go into the medical field where she has worked for the last 29 years to honor his memory.

Then last year, she was diagnosed with breast cancer. For the first time in her life, she could truly relate to the fear and pain that her brother went through as a young man.

In 2019, breast cancer is the estimated leading type of new cancer case for women in the United States, according to the American Cancer Society. Loflin believes that if it were not for her faith, her brother’s courage and the unwavering support of her medical team at Novant Health, she would not be here today.

Loflin was the fifth of six children in her home in Portsmouth, Ohio. Her father, Edward, was a pastor and the children spent most of their free time at church where they each played in the church band, sat in the same pew and looked forward to family dinner after service. 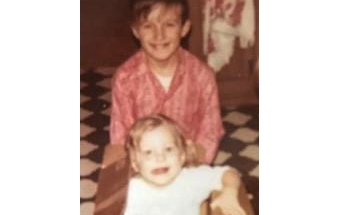 Terrie Loflin and her brother Mark

Everything changed, however, when her older brother, Mark, was diagnosed with a brain tumor.

“I was 12 when Mark was diagnosed at 19,” she said. “For the next five and a half years of my life, my family each took turns sleeping in his room at night. To say our family’s faith was tested during that time is an understatement, but we never gave up hope.”

Despite his terminal prognosis, Mark stayed positive. He even went on to graduate from community college with an electronic media degree. Throughout it all, Loflin was also inspired by her brother’s medical care providers.

“I remember his radiation therapist would bake brownies for him. And his physical therapist was incredible,” she said. “She came to our house a few times each week, and I remember thinking I want to grow up to be just like her.”

Mark passed away during Loflin’s senior year of high school. Determined to honor his legacy, two months later, she enrolled in the radiology tech program at Morehead State University in Kentucky. 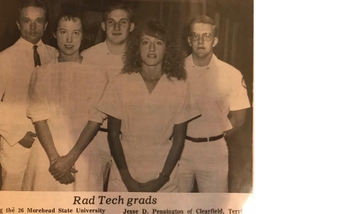 It was during that time that she met her husband, Mike. After graduation and a year of courtship, the couple married, moved to North Carolina and had two girls, Brittany and Rachel. Soon after, she worked for 10 years at Moses H. Cone Memorial Hospital and then applied for a new position in the radiology and imaging department at Thomasville Medical Center, where she was eventually promoted to manager.

“I never would have imagined to be in this position in life, but I am so grateful for the work I get to do here.”

In 2017, Loflin remembers celebrating the addition of the first 3D mammography machine at Thomasville Medical Center with a ribbon-cutting. According to the American Cancer Society, 3D mammography provides better imaging of the breast than standard 2D imaging. Studies have shown that this results in better detection of cancer and fewer false positives. 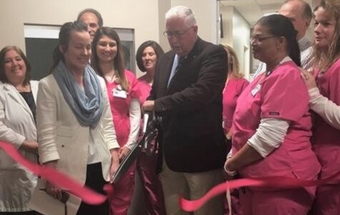 Coincidentally, Loflin was also due for her annual mammogram appointment. And so it was that on Oct. 28, 2017, she became the first patient to use the new 3D mammography machine. Before going in for her screening, she had felt a suspicious lump on her right breast. Unfortunately, the test confirmed her fear and her radiologist recommended a follow-up ultrasound.

Devastated, Loflin scheduled her next appointment, but had no time to grieve because her mother, Donna, became gravely ill. After several gut-wrenching trips home to Ohio to say goodbye, Loflin’s mother died on Dec. 11. After the funeral, Loflin transitioned from caretaker to patient once again and went back for her biopsy on Dec. 28. A few days later, the radiologist confirmed she had breast cancer.

“As soon as I got off the phone with my diagnosis, my questions were huge,” she said. “But then, I’ll never forget that two minutes later my nurse navigator, Jamie Calcutt-Flaherty, called me from the Novant Health Breast Center in Winston-Salem. She answered all of my questions and carefully explained what would happen next in terms of my treatment plan.”

In January, Dr. David R. Carr, a general surgeon and breast cancer specialist at Novant Health Salem Surgical Associates - Winston-Salem, explained that a partial mastectomy of the right breast was recommended, followed by 18 weeks of chemotherapy and 20 radiation appointments. Overwhelmed but eager to get her treatment started, Loflin scheduled her surgery for February.

“She continued to embrace the necessary multidisciplinary treatment plan.” Carr said. “Her positive attitude and proactive approach are testaments to why she did and continues to do well.”

When it rains it pours

“That’s when I felt like I was truly broken and I wasn’t sure if I was going to make it,” she said. “I didn’t want to have my surgery if Mike couldn’t walk, but fortunately, they rushed him through surgery on Jan. 24 and he has since recovered. I was then able to go forward with my surgery.”

“I got to do my chemo right across the street from my hospital,” she said with a grin. “This was convenient because I had decided to keep working throughout the course of my treatment.” 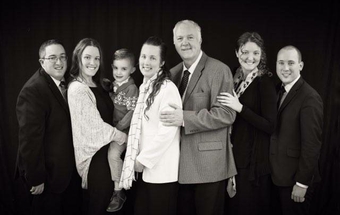 Loflin knew that losing her hair wouldn’t be easy, so she preemptively took family photos the day before her first chemo appointment and then asked her pastor, who is also a barber, to shave her head.

Coworkers, she said, “wrote me cards, brought me gift baskets, and provided hot meals for my family every week for the entire length of my treatment.”

Then on March 4, 2018, yet another blow, Brittany, her daughter, and future son-in-law were involved in a serious car wreck. They recovered, but not long after Loflin developed a serious fever as a result of chemo and stress. She was then admitted to Novant Health Forsyth Medical Center for five days. It was during that time that she asked her oncologist if she should just give up on her treatment.

Collins reassured her that she was going in the right direction. “Her spirit and determination throughout one year of chemotherapy treatment has been inspiring,” Collins said. “I have also been touched by her positive outlook and her will to fight throughout her journey.”

Loflin was discharged from the hospital, completed her last chemotherapy treatment and went on to complete her radiation treatments at Novant Health Oncology Specialists in Kernersville, North Carolina.

On Aug. 9, Loflin’s birthday, she completed her last radiation treatment. Her family and care team cheered as she rang the ceremonial bell. Today, she is considered to be in complete remission and cancer free. 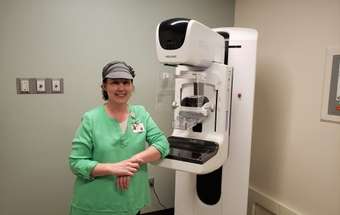 “I now know the fear that my patients experience,” she said. “Until you go through it yourself, you really don’t understand the fear of dying and leaving your family. In health care, you can become so numb if you are not careful. The truth is, there are remarkable life-changing moments taking place every day within our hospitals, these moments will change your life if you let them.”

Fast forward a few months. Loflin’s hair has started to grow back and, more importantly, her smile and joy never left. Next year, she will celebrate her 20th year at Thomasville. In her office, you will notice a sign above her desk that reads: Climb every mountain.

“I felt like last year was full of mountains,” she said. “There is a scripture verse that talks about how with faith we can be more than conquerors. I feel like my brother and I are both conquerors. Moving forward, I want my patients to listen to their bodies and to follow through with their scheduled screenings. And as for myself, I want to worry less about the small stuff and truly live.”

Patients can schedule a mammogram at a local Novant Health Breast Center.