Fast-action may have saved young woman who had a stroke

Nov. 14, 2015 started out like any other Saturday for Meghan McKee. She took a spin class in the morning, enjoyed a lunch date with her boyfriend, Steven, and took a stroll through downtown Winston-Salem. But everything changed that evening when McKee reached for a water bottle and her hand slapped the nightstand like dead weight.

When Steven walked into the bedroom, he quickly realized that something was wrong when the left side of his girlfriend’s face was drooping, and her left foot seemed to be dragging behind her as she walked. He called 911.

On the way to the hospital, McKee recalls the emergency medical technician (EMT) telling her that she was probably having a stroke. She remembers feeling terrified and thinking, “I am only 31 years old and healthy – there’s no way that I am having a stroke.”

While in the hospital, medical tests also discovered that McKee suffered from a hole in the heart (known as patent foramen ovale, or PFO), that had increased her risk for stoke. Four days after her thrombectomy, doctors repaired her heart to lower her risk for a future stroke.

Today, at 35, McKee is married to the man who called 911 and probably saved her life. The couple lives in Charlotte where McKee works as a physical therapy supervisor. Except for that fact that her left hand is not quite as coordinated as it once was, she has experienced a full recovery.

In fact, the couple gave birth to fraternal twins, Madison Lyn and Alexandra Lee on Jan. 28, 2020. “My newfound understanding and meaning for my stroke journey is the fact that my heart was healthy enough to allow me to carry my two beautiful twin girls for 38 weeks and for them to be born at a very healthy weight.” 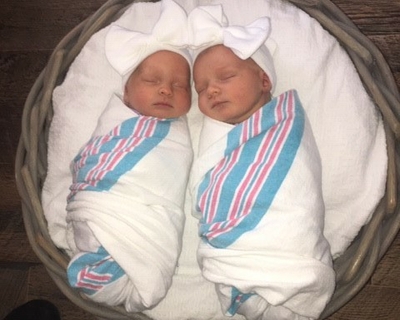 McKee said the stroke has also made her a better therapist. “I am really able to connect with stroke patients that I work with on a level that would not be possible had I not gone through this experience,” she said.

McKee has also become an advocate for stroke awareness and has shared her story with local media, at stroke survivor events, and as part of American Heart Association outreach events.

“I cannot think of a better way to turn my experience into something positive,“ said McKee. “I want to help others recognize the signs of stroke and realize that it can occur in anyone, regardless of age.”

As a medical professional, McKee knew the signs of stroke but could not recognize them in herself because of the part of her brain that was affected by the stroke. “I am so thankful that Steven knew the signs and reacted as quickly as he did,” said McKee. “Or my story would have had a very different ending.”

McKee stressed the importance of everyone understanding the signs and symptoms of stroke. “FAST is an acronym to help detect stroke,” she said. The acronym stands for: Facial drooping, Arm weakness, Speech difficulties and Time.  Get quick facts that that could help save someone’s life.