Weathering two storms at once: hurricanes during COVID-19

You may have heard this wry twist on an old adage: “If it’s not one thing, it’s two.”

That describes Shelbourn Stevens’ life right now. The president and chief operating officer of Novant Health Brunswick Medical Center in Bolivia, North Carolina, is guiding his team members and patients through a pandemic while also, as of the first week of August, preparing for hurricane season.

Isaias was a Category 1 storm when it made its way up the East Coast, but the team had to prepare as if it were a Category 4 or 5. “This turned out to be an exercise,” Stevens said. “But it’s still early in the season. We may have to go through this again.”

Stevens is calm while talking about what could’ve been a double disaster. “We had time to plan,” he said. “But I reminded our leaders: Don’t pull out the usual emergency management hurricane plan. This time we’ve got to make social distancing a part of it. I’m proud of how our team dealt with the uncertainty in the middle of a pandemic.”

Stevens, who – as we reported last year – is always ready with a plan B. And a plan C was ready this time, too. “We had some team members who needed to spend the night – as we always do during severe weather,” he said. “So, we converted classrooms into places they could sleep.”

Stevens knew before the storm hit who needed to stay at the hospital because he and his leadership team had been rounding on employees a couple of days in advance. “We were asking team members: ‘Do you have a plan? What is your plan?’ And if they were unsure, we said, ‘We’ll give you a place to sleep.’ Twenty people ended up staying overnight.”

Social distancing still had to be top of mind. “Instead of having four staff members to a room, as we usually do, we planned for two,” Stevens said. In the end, they needed to have just one person per room. 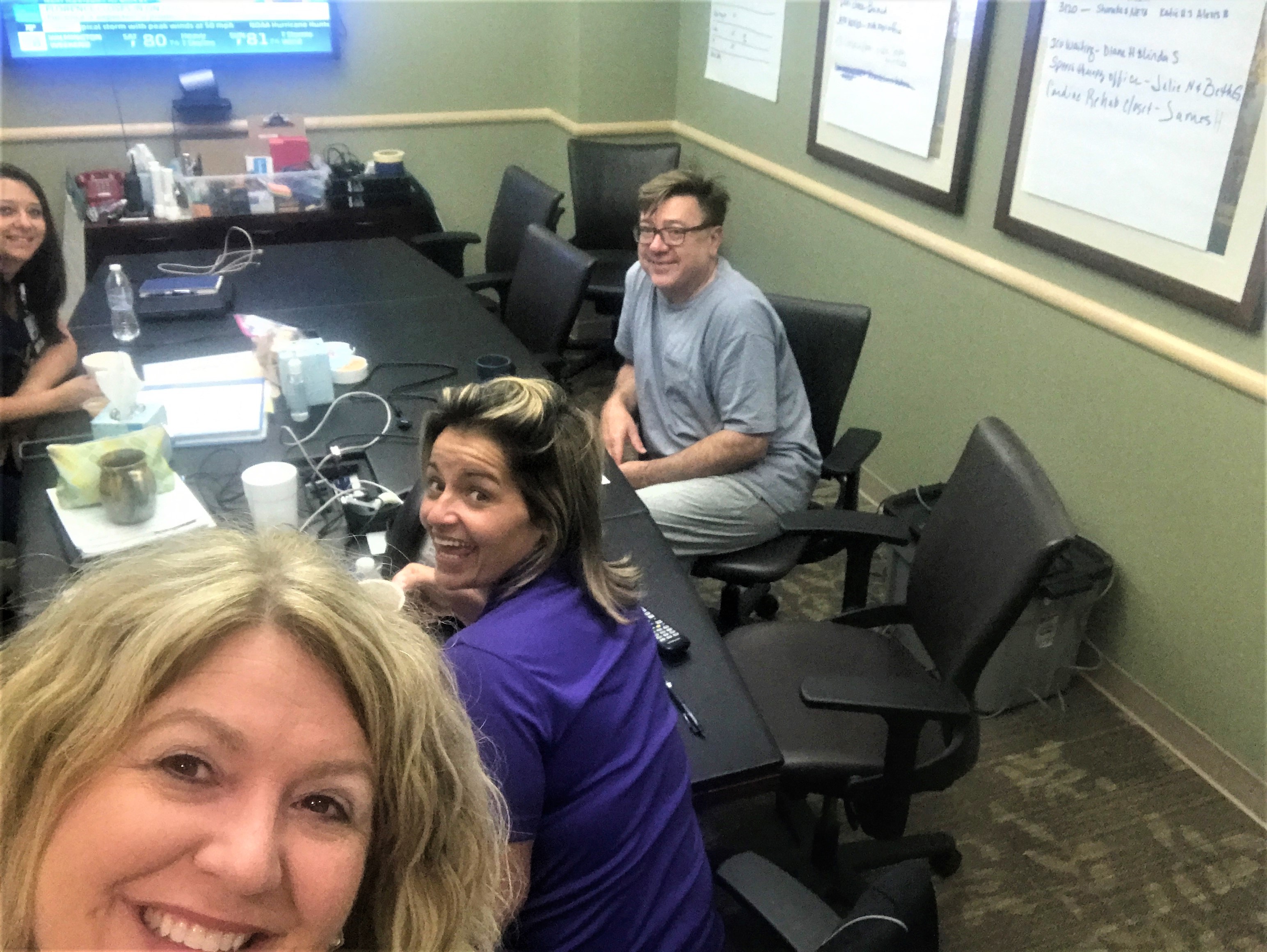 In every disaster, Stevens looks for lessons so that he and the team are better prepared for the next one. After Hurricane Florence, one of the lessons learned was to check the parking lot. Several families were stranded in their cars as flood waters rose. Stevens invited them inside and turned waiting rooms into temporary shelters.

This time, there were cars in the hospital parking lot, too – but for a different reason. As a rule, visitors to the emergency room are limited during the pandemic, so some people wait in their cars while their family member is evaluated and treated. But these would-be visitors had to worry about flooding and downed trees. They couldn’t get home, but they couldn’t be crowded into waiting rooms, either.

Staff made sure no one stayed in their cars; it wasn’t safe. The emergency department manager helped coordinate getting them inside and making sure they practiced social distancing.

Stevens is generally two steps ahead of trouble. (Before Hurricane Florence, he even had to send some patients to other hospitals in the network to free up bed space.) Before Isaias, he had a truckload of common supplies – masks, gloves, gowns, gauze, IV drips – delivered ahead of the hurricane. They didn’t need to use any of the stash, but it’s there if they need it. “It’s all on a 53-foot truck in our parking lot,” he said. “And it’ll sit there through the end of hurricane season.”

In the days leading to Isaias’ landfall, Stevens and his team had been coordinating with county emergency management and the health department. The county opened a shelter – just in case – but didn’t need any hospital personnel to staff it.

Stevens is already thinking about the next storm and urges residents to do the same. “I tell people to evacuate early,” he said. “Don’t wait until you need the shelter – especially if you or someone in your household has an underlying health condition. Make your evacuation plan before you need it.”

And if you end up needing to get to a shelter, he suggests taking supplies with you. “Don’t assume that hand sanitizer, masks, food and sleeping bags are going to be there waiting on you,” he said. “Bring your own.”

If another hurricane hits while COVID-19 is still surging, Stevens and team will be ready:“You can never let your guard down.”

How hurricane experience came in handy for COVID-19 doctor