How hurricane experience came in handy for COVID-19 doctor

'Preparedness is a way of life here'
By Page Leggett

Dr. Lawrence Mason is cool in a crisis.

And Mason, medical director of inpatient services at Novant Health Brunswick Medical Center in Bolivia, North Carolina, has been through plenty.

As a native of Titusville, Florida, he grew up preparing for hurricanes and dealing with their destructive aftermath. He was on the front lines after Hurricane Florence tore through the North Carolina coast in September 2018 and talks calmly about it – as if it were a pesky inconvenience rather than a catastrophe.

“Brunswick Medical Center is at one of the highest points in the area,” he said. “So, with all the flooding, it was like the hospital became a castle and we were all surrounded by a moat.”

He had been off the schedule when the hurricane hit. But the extensive damage and flooding left him stranded at his Wilmington 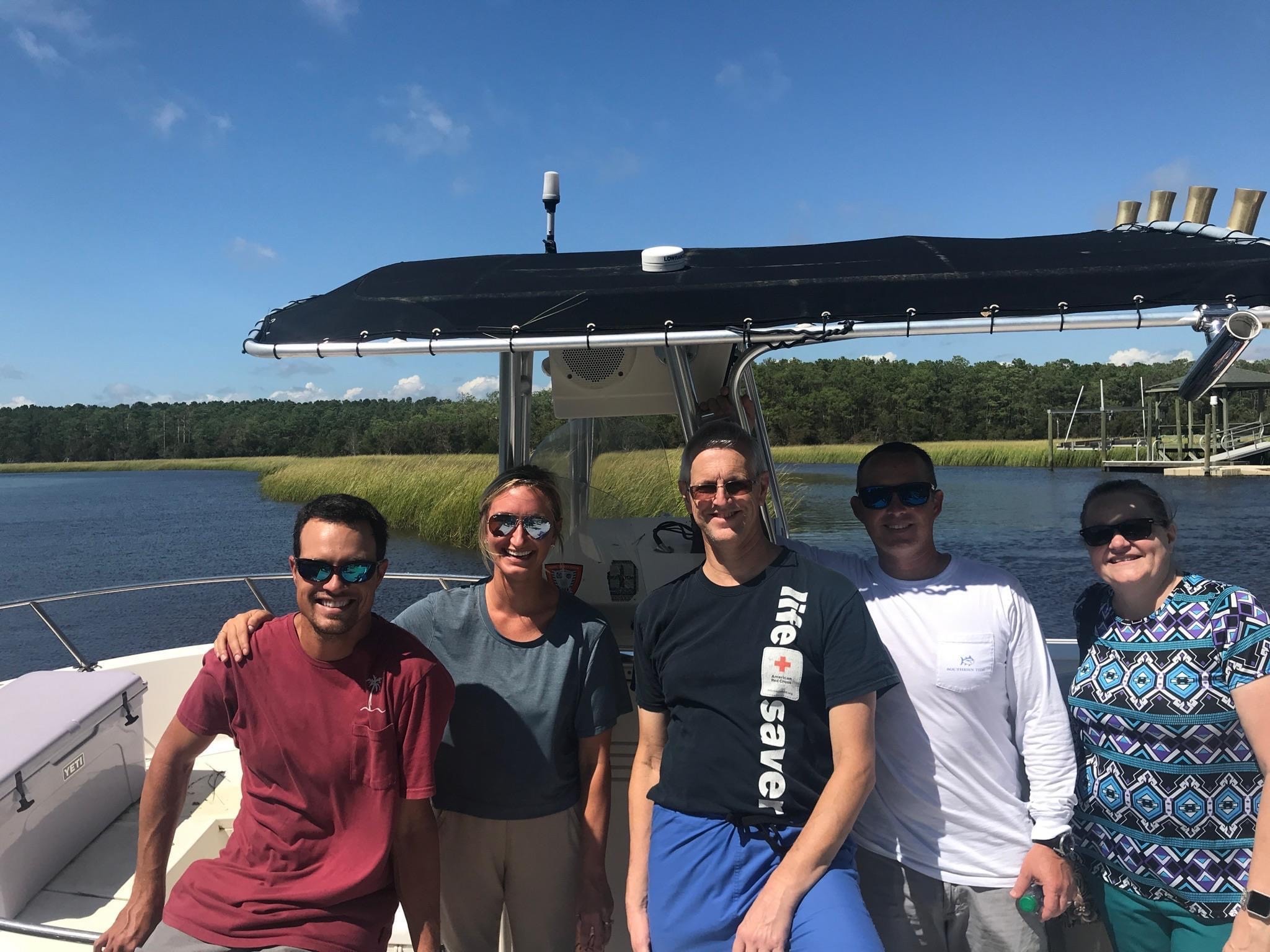 home with no way to get to work. Several team members, including his physician assistant, Hayden Delabastide, and her husband came to the rescue. They picked him up by boat and brought him and a couple of other staff members to the hospital.

“That was a different kind of commute,” he deadpanned.

Once there, he – along with several other physicians – didn’t leave. For eight days. There was no (easy) way to get back home, and there were patients who needed him. Mason is a hospitalist (trained to treat hospitalized patients) and the hospital was where he was needed most.

Florence was different from any hurricane he’d experienced as a boy in Florida. He’s accustomed to being without power and conveniences for a couple of days. But with Florence, people hunkered down in place – many of them trapped – for more than a week. “That was new to me,” he said.

The COVID-19 crisis has some parallels to a category 4 or 5 hurricane. “COVID is sort of like a hurricane,” he said. “Just more prolonged.” Both require planning; a coordinated, team response; and rational thinking. The doctor is adept at all three.

And he shares credit with others. “Our respiratory care team here is excellent,” he said. Not only in their care of patients – but in caring for their teammates. They made at least 20 face shields in different sizes using a 3D printer and gave them to Mason and other front-line workers. “They are so resourceful,” Mason said. “This was such an awesome, creative response.”

Novant Health has provided staffers with all the necessary PPE during the COVID-19 crisis. “Those of us who intubate patients – a risky procedure right now – have all the protective equipment we need – the full gown, gloves, N-95 masks, even booties on our shoes,” he said. “The staff feels good about how protected we are, and it’s helped lessen our spouses’ anxiety, too.”

Mason isn’t just taking every precaution at work; he’s doing that at home, too. “There are some protocols mandated by my wife,” he said with a laugh. “We have three kids at home, and keeping them safe is our priority.” When he comes home from work, he now enters the house through the garage. It’s adjacent to the laundry room, so his scrubs go directly in the washing machine.

It’s just one more safety provision for a doctor who’s used to taking them.

“Preparedness is a way of life here,” he said. “Our hospital administration is used to – and good at – dealing with crisis preparation. And I think because our population is used to heeding warnings about evacuating, they’ve taken the shelter-in-place warnings seriously. They’ve been smart and followed directions.”

The North Carolina coast is always a favorite summertime vacation destination. Mason knows tourists will be headed his way in the next couple of months, increasing the area’s population and the risk level. And hurricane season won’t be far behind.

He takes it seriously while also taking it in stride. He’s used to preparing for – and coming through – all kinds of crises.

Find out how you can help.

Business traveler thought it was the flu. He was wrong.