How speed, accuracy and coordination helped a cancer patient

`Attitude is everything’
By Cliff Mehrtens

Ken Jackowitz was only about 10 minutes into his initial physical exam with Novant Health’s Dr. Genevieve Brauning when he got a question he wasn’t expecting.

”She looked at me and asked `What’s up with your neck?’ Jackowitz said.

He had no idea. It had never been a problem. But Jackowitz quickly embarked on a journey at which he continues to marvel. He was diagnosed with thyroid cancer. 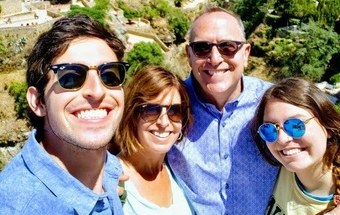 The Jackowitz family vacationing in Spain.

Jackowitz whipped out his smartphone, retrieved his medical record via Novant Health’s MyChart and rattled off the time span. His exam with Brauning was Feb. 1. Four days later, he had an appointment with Dr. Adam Spitz, a Novant Health endocrinologist who performed a biopsy. Three days later, Jackowitz got the results. Twelve days after that, he had a pre-surgical consult. On March 1, Dr. Kristin Wagner performed the surgery.

“I didn’t feel rushed,” Jackowitz said. “I didn’t feel marginalized. It was very thoughtful, and I got whatever amount of time I needed with every practitioner. Their approach to this is very inclusive, versus me having to guess, and wait, and beg.”

Being thorough, but accurate

Jackowitz, who swims for exercise, had been laboring in the pool. He’d struggle through four laps, have trouble breathing and feel exhausted. His wife recommended he visit Brauning, a family medicine physician.

Brauning noticed that the front of Jackowitz’s neck appeared a bit asymmetrical. She asked because she’d never examined him, and didn’t know if he’d had the condition for a long time.

“It is very important to me to spend time face-to-face with my patients and make sure that the majority of our visit is not spent with me at the computer,” she said.

It was a Friday afternoon, but Brauning’s referral coordinator Yolanda Merriman was able to coordinate Jackowitz’s trip to the imaging department immediately, downstairs in the same building at Novant Health South Park Family Physicians. He received an ultrasound examination.

Within a couple hours, Brauning got the results, which confirmed a mass in Jackowitz’s thyroid. On Monday, she called him directly to report the findings and reached out to Spitz directly to expedite a consult.

Shocked by the test results

“Cancer wasn’t even in the back of my mind,” Jackowitz said. “I thought maybe it was some kind of infection.”

Spitz’s biopsy confirmed cancer in Jackowitz’s thyroid, a gland in the lower part of your neck that regulates metabolism. He referred Jackowitz to Wagner, who surgically removed his thyroid and 17 lymph nodes nearby, of which four were malignant.

Spitz’s practice, Novant Health Endocrinology – Randolph, has been recognized as a patient-centered specialty practice. That means it focuses on coordinating and sharing information among primary care physicians and specialists. The goal is a seamless experience for the patient, and in Jackowitz’s case, a fast one. 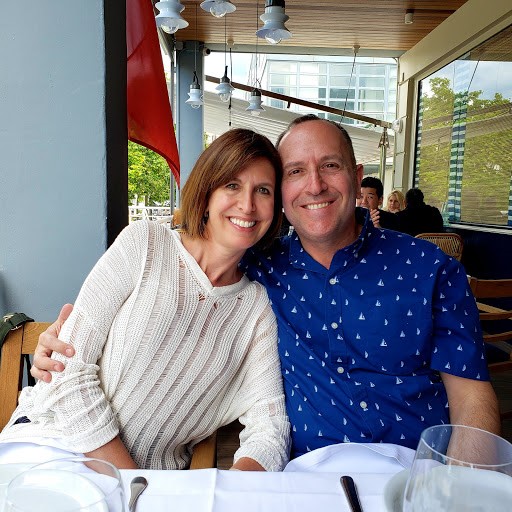 Lori and Ken Jackowitz are each a cancer survivor.

"It’s a lot of guidance, a lot of face-to-face and a lot of assurance,” Spitz said. “The communication process is what allowed us to go from the primary care physician saying something’s wrong to getting him in quickly, and relaying the information to the surgeon.”

“The whole thought about mortality didn’t come to pass because my mother-in-law had an amazing attitude when she was going through hers,” he said. “My kids to this day forget that (Lori) even had breast cancer because of her attitude. For me it was `I’m going to get through this, be done with it and move on.’ Attitude is everything.” 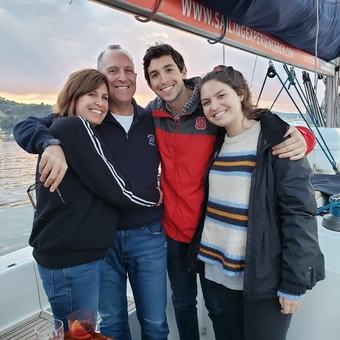 All smiles on a family boating trip.

Jackowitz, had a dose of radioactive iodine three weeks after surgery, which forced him to be sequestered four days in an upstairs bedroom at home. Today, he doesn’t show any evidence of disease. He swims regularly, knocking out 30-32 laps per workout. The house is a lot quieter with both his children away at college (Ethan, 21, and Mia, 19). Some of the energy void is filled by Maggie, a 14-year-old rescue dog that Jackowitz frequently walks around the quiet, wooded neighborhood. He and Lori are enthusiastic hikers and travelers.

“I’m back to pretty much everything being normal,” Jackowitz said. “The experience I had at Novant Health was second to none.”

In fact, Jackowitz noted, he once had a concierge physician outside of Novant Health. But after his cancer journey, he realized he was getting more personalized care with his new Novant Health providers  than he was with another doctor promising specialized care and attention.

TOP PHOTO: Ken Jackowitz and Maggie, his 14-year-old dog that the family rescued.