Dr. Gus Parker took on a new role -- and is making a difference
By Page Leggett

Black men are dying too young.

In this case we’re not referring to the epidemic of gun violence, although that merits discussion, too.

We’re referring to disease. Preventable disease. “African American men lead almost every category relative to morbidity and mortality for every disease,” said Dr. Augustus “Gus” Parker, III, an ob-gyn at Novant Health OB/GYN Urgent Care - Carmel – and author – in Charlotte. “The life expectancy is some eight to 12 years less than their white counterparts. We’ve got to address those issues in hopes of reducing the disparities.”

His friend, John Gregory, founded a group to do just that. The African American Male Wellness Agency (AA Wellness) was established in Parker’s hometown of Columbus, Ohio, in 2004. The group’s mission? Increase the life expectancy of Black men via improved physical, mental and financial health; an emphasis on fatherhood; and research.

Gregory decided to host a walk. But this wasn’t – and isn’t – a fundraising event. Walkers aren’t asked to get sponsors and donors to participate.

The first year drew 100 people. The second year attracted 1,200 people. “The third year, they contacted me about adding health screenings,” Parker said. “We also brought in vendors and entertainment and, by 2019, we had an event in Columbus that attracted some 30,000 people.”

That one event has grown into a movement led by AA Wellness that takes place throughout the year and culminates in a health festival and 5K run. The event is now in 17 cities, including Los Angeles, Memphis and Charlotte. 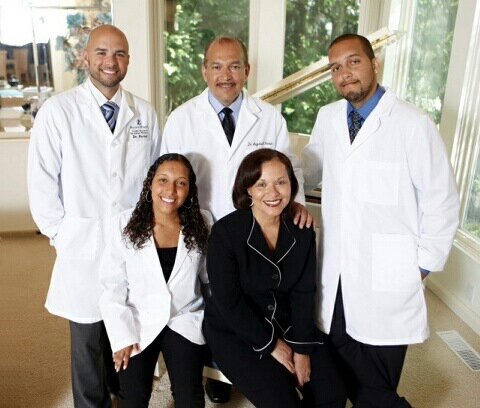 When Parker moved to Charlotte in 2017 to be closer to his three adult children – all of whom are physicians and two of whom are at Novant Health – he gave a presentation on the African American Male Wellness Agency to Novant Health CEO Carl Amato, who was immediately supportive. Novant Health became a major sponsor at the national level. Every program, including the walk that the agency offers, is free. So, sponsors are crucial.

This year’s National African American Male Wellness Walk, originally scheduled for Oct. 9, has been canceled due to the resurgence of COVID-19 cases. NASCAR driver Bubba Wallace – who speaks openly about his own mental health and social justice issues – was serving as honorary chair.

The annual festival helps men know their health screening numbers, connects them to a physician, encourages them to get moving and promotes a healthy lifestyle.

And that’s not as easy as you might think. “My background is in women’s health care,” Parker said. “But for men, there's no parallel for early engagement in the healthcare system like there is with women. At age 14, 15, 16, girls to seek a healthcare professional to prevent pregnancy or for prenatal care. That early engagement as a young adult woman continues with pap tests, mammograms, annual physicals and so on.”

“I joke that men don’t go to the doctor,” he continued, “until something’s broken, rotten or falling off.”

The walk is not a one-off event, Parker emphasized. “We captured this model called ‘barbershop talk.’ Barber shops in the black community are like our country clubs. We utilized barbers and mental health professionals and created a safe space for rich discussions for African American men.”

They’re also leaning on the church – an essential part of Black communities. There’s an old adage among some devout people. As Parker put it, it’s the “I don’t need to go to the doctor or take medicine because I’m going to give it up to God” mentality.

So, the agency has been enlisting clergy to help deliver the message: “God has given you a mind of discernment,” Parker said. “And God gave special gifts to people – like physicians – to aid us in our health care.”

During the worst of COVID, the agency went on mask drives. “This programming is designed to engage people where they are,” Parker said. “It’s a unique grassroots approach, door-to-door guerrilla marketing.”

Getting guys involved – and in the kitchen

COVID-19 forced AA Wellness to get creative with programming. “Cooking with Dad” is one example. “We started with nutrition,” Parker said. “We had a Black celebrity chef lead an online cooking demo for parents and kids. I got HelloFresh to donate 100 steak and shrimp dinners. We had pediatricians talking about healthy food choices, portion control, childhood obesity.” It was so much fun that people hardly noticed education had been slipped in.

The group also held a virtual summit via Zoom in July on the topic of Black men and mental health. Real Men, Real Talk: Our State of Mind - A National Conversation about Black Men’s Mental Health is available on YouTube. Group organizers intend for it to be an annual event.

“You’re taught, as a man, not to show weakness or emotion,” Parker said. “But we’re learning that keeping a lid on it will make it boil over at some point. There has to be an outlet.”

“On the ‘Real Men Real Talk’ seminar, I said that oftentimes people perceive that only rich people can get counseling,” Parker continued. He asked them to consider something accessible to any of them.

He said, “Look in your own neighborhood. Find men with similar interests. Meet at the corner bar. Get the people you play cards with together one night and talk about your challenges. You don’t have to have a lot of money to minister to each other. Sometimes, what you need is a listening, sympathetic ear.”

AA Wellness has gotten Black men to talk, to listen and to get moving.

“We hear people say that this the first time they’ve ever walked with their family,” Parker said. “They’ll tell us it was the impetus to start doing that routinely. Many come back the next year and tell us they started eating healthier and lost weight, that their numbers came down, that they did finally get connected to a health care provider.”

The events are more than a good time. “There’s always someone who learns his blood pressure is at stroke level, and he’s not connected with a physician,” Parker said. “Every year, we take somebody directly from the walk to the hospital.”

Physician/father. Learn more from a physician who’s an expert in women’s health, a promoter of men’s health, a husband and a father of three doctors. Dr. Augustus G. Parker III has recently published a book, “Mining Diamonds.” Read more about it here. Novant Health’s Dr. Ophelia Garmon-Brown, an author herself, calls it a “must read” and said, “Through the efforts of the village, beautiful parenting, faith, love and grace, this book shares how to MINE FOR DIAMONDS!!!”

World’s smallest heart pump brings man back from the brink

As opinions shift on prostate cancer, here is the latest on what men need to know