Her realization: Cancer is traumatic… and that’s OK

She is a survivor after double mastectomy and reconstruction

One morning in April 2014, Shenell Thompson woke up to a strange feeling in her breasts.

It was a fullness — a sensation she’d known well while breastfeeding but hadn’t felt in 14 years. Then, she checked her nipples, and fluid seeped out.

“That’s when I freaked out,” Thompson recalls. “I ran out of my room and told my husband and immediately made an appointment with my regular doctor.”

The day she went in for her visit, she couldn’t replicate the experience. Her doctor advised her to keep an eye on her breasts and come back if it happened again. It did, and that set off a series of tests to determine what was going on.

At first, doctors thought it was a papilloma, a benign nodule near her nipple. Then it appeared to be atypical ductal hypoplasia, a cluster of abnormal cells that could be pre-cancerous. But when her team at Novant Health Forsyth Medical Center went in to remove the problematic tissue, they found something far more serious: stage 0 ductal carcinoma, a cancer confined to her milk ducts.

At the time, Thompson was 42 years old.

Thompson had a mammogram the previous December. She’d kept up with regular, at-home breast exams. She had lost two aunts to breast cancer. A mother of three, she knew she had to be proactive, so she was. 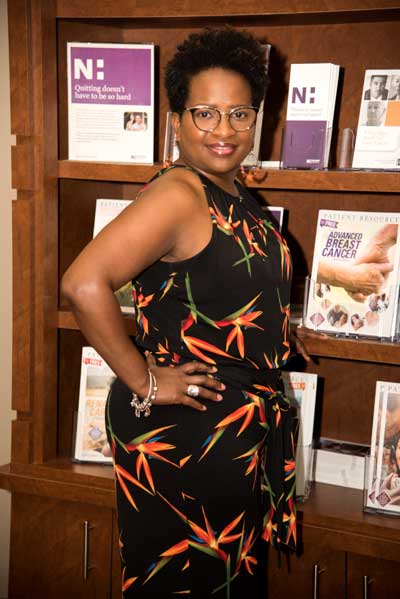 “I decided early on that I would always live in a way that would allow me to give my best self to my children. To honor that, mammograms were one of those things I wasn’t going to miss,” Thompson says.

But Thompson’s cancer didn’t present as a lump. She has highly dense breasts with lots of calcification. That shows up in a mammogram, but it’s typically benign. For years, she’d been told the calcification was there, but also that it was nothing to worry about.

Now, all that had changed.

Thompson met with the radiation oncologist and was given the option of doing a single mastectomy of the right breast or a double mastectomy with reconstruction. The second option was more intense, but it would allow her to avoid radiation and years of medication. That’s what she chose.

“Let me just remove these breasts and anything that’s going on with them because they’re just not acting right,” Thompson recalls. “The same cells were in both breasts, so my doctor said it felt like I really made the right decision.”

That doesn’t mean it came lightly.

“Making the choice to amputate my breasts was really emotional. I was really lamenting over what happens to your body and your personal image and sexuality and all the things that would be impacted by this decision,” she recalls. “I was also wrapping my mind around the fact that I am one of those people who was really proactive, and I still got cancer.”

Her recovery process was long and intense. She had a hysterectomy the following August, unrelated to her cancer, and was in and out of hospitals for a total of about 18 months.

“Then I stuck it on a shelf and didn’t deal with it for about three years,” she says. “I think I did a really good job of faking I was OK at first, and then I finally realized that was a really traumatic thing that I went through. I’ve been slowly processing it ever since.”

In the five years since her surgery, Thompson’s perspective on life has shifted significantly.

“When you go through something like that, I don’t know if it’s good or bad, but it really does take off the rose-colored lenses you walk through life with,” Thompson says. “I find myself interacting with fewer people. I don’t have the emotional energy to give to a lot of things anymore. The people who are closest to us may not have been the people who were strongest for us, and that changes how you value your relationships.”

Thompson has found new connections, though, in online support groups and other survivors, including an old friend she reconnected with shortly after her diagnosis.

“We had not talked to each other in 10 years, and we talked on the phone for two and a half hours one Saturday morning. We were both crying,” Thompson recalls. “I was really fortunate to have people like that who had already gone through it. I had three really good friends in the middle of being treated for breast cancer, and they were like walking encyclopedias for me.”

They gave her practical advice, like investing in button-down shirts and buying a recliner, because they had learned through experience that getting dressed after surgery is much easier when you can slide a button-down shirt over your shoulders, rather than pulling T-shirts on over your head. Likewise, a recliner is much more comfortable and supportive post-surgery than a traditional, flat bed. Shenell slept in hers for five months.

“Cancer makes you question your own mortality. It’s scary and sometimes you don’t know what to say or how to say it. So, you create this sisterhood of people who are going through this same experience because they get it,” Thompson explains.

Five years after her mastectomy, Thompson is cancer free and in good health. But that hasn’t shaken her anxiety.

“I’ll get something as simple as a headache now, and I have to talk myself off the ledge. If I’m having diagnostic tests, I’ll ask the doctors, ‘Are you absolutely sure there’s nothing?’” she says.

Thompson is working to manage that anxiety through therapy, particularly since her mom was recently diagnosed with pancreatic cancer.

“I’ve come to realize that cancer was a very traumatic experience in my life, and it’s OK to own that. I don’t feel the need now to create this sense that I was a super person, that I endured this horrible thing and now I’m a better person because of it. Cancer sucks. It will always suck.”

For the first four years after her mastectomy and reconstruction, Thompson would visit her surgeon every six months for manual exams on her new breasts.

Now, in her fifth-year post-surgery, she’s graduated to a single MRI.

“To me, it feels crazy. I think someone should be making sure my breasts are OK all the time,” Thompson says.

She feels fortunate to have had a wonderful doctor who always erred on the side of caution and sought to do whatever she could for Thompson throughout her cancer journey.

“She didn’t just shut down my experience. So that’s what I teach my daughters. I remind them that it’s not just their breasts. With women, it’s your whole gynecological profile, and you have to make sure that you’re advocating for it,” she says.

Many women don’t have access to consistent, quality medical care so they can be proactive about their health. That’s why we work every day to increase access to mammograms for under-served and uninsured women across our region. Early detection saves lives, and every gift to our Think Pink Fund goes directly to a life-saving 3D mammogram to someone in our community. Help us today by giving whatever you can to support the cause. No more excuses. Just more mammograms.