Her disability was no match for her determination

When Nakisha Isom was growing up, she knew that she and her family were different. That was obvious every time they looked in the mirror. Isom, several of her siblings and their father were all born with differences to their arms or hands.

Isom’s father had two shortened arms. Isom was born without standard thumbs. Instead, her fifth digits are unbendable. But what no one – not even Isom – realized is that her biggest difference was hidden deep inside, invisible to the eye. More about that later.

Isom, 43, is a certified medical assistant and surgery scheduler with Novant Health Brain & Spine - Kernersville. Her team at Novant Health has been deeply supportive, she said, and she’s grown steadily in her responsibilities by finding her own workarounds – and by taking advantage of continuous education the organization offers. Novant Health this year has again been named a “Best Place to Work for Disability Inclusion” by Disability:IN and the American Association of People with Disabilities (AAPD).

July is Disability Pride Month, a celebration whose roots go back to July 26, 1990, when President George H.W. Bush signed into law the Americans with Disabilities Act, landmark legislation that prohibits discrimination against people with disabilities in areas ranging from transportation to employment. “Novant Health has been very supportive and very encouraging with my ‘differences,’” Isom said. “I love how my team trusts in my ability to do my job and to do it correctly.”

‘I never looked at myself as incapable’

No one in Isom’s family knew why four of the six of them had shortened arms or nonstandard fingers. They assumed it was a genetic problem and that they just needed to deal with it. “My father’s disability was very noticeable,” Isom said. Yet her dad owned and operated his own store in Winston-Salem and managed all of his daily tasks, and her sister, who also has short arms, drove a standard car. “My parents were really adamant about not changing the way I live,” Isom said. “In our household, we could never use the excuse ‘I can’t.’” 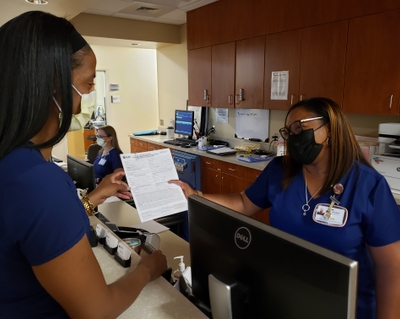 Still, Isom’s hands didn’t look or work like her classmates’ did, and that made her a target of bullying. She hated keyboard class, and writing for long periods just plain hurt. “My hands would tingle and cramp and go numb,” she recalled. But she didn’t spend a lot of time feeling sorry for herself. She pursued athletics and was a hard-charger on the field in several sports.

When you have a disability, she said, you can encounter “people who are curious and want to do things for you because they think you can’t or people who don’t like you because you are different, so you have to prove yourself. Trying to navigate that as a kid was difficult. Did I get into my share of fights growing up trying to prove myself? Yes. But did I have some awesome people around me, too? Yes I did.”

Isom, who always wanted to pursue a career that allowed her to help others, started at Novant Health as a certified nursing assistant and soon realized her disability presented some challenges. “There is nothing in the medical field made for people who lack traditional thumbs,” she said. “One of the most difficult things is opening certain packages. I don’t have thumbs to grip and hold the package.” Add to that the need to maintain a sterile environment, and Isom needed to find a new path. The tenacity she developed as a child served her well.

“I adapted,” she said. “I open packages with my index finger and middle finger. I still use the same sterile techniques, the same gloves, but I have adapted.” Similarly, Isom taught herself to use other fingers – which she said are now very strong – to connect pieces of medical equipment, such as oxygen tubing. “My disability helped me become who I am. I never looked at myself as incapable.”

Isom soon became so adept in her work she was able to work on a team of two people who traveled through Novant Health Forsyth Medical center inserting PICC lines – peripherally inserted central catheters, thin tubes inserted into veins. It’s an important, delicate procedure that requires special training and a high level of skill. It was while Isom was working on the PICC team that she learned the full truth about her disability – a secret that had been hiding unseen inside her all her life.

‘I’ve only seen this once before’

It was a day like any other. Isom was working second shift and started to check on her patients. Suddenly, she was overcome with a shaky, jittery feeling. “I went into the breakroom and sat down to open a snack, thinking maybe I was just hungry,” she said. “Before I even got it open, I passed out.”

Isom woke in the emergency room, the team doing a full workup on her. “Your EKG is abnormal,” a tech told her. Within days she was in the office of Dr. Mark Mitchell, a cardiologist with Winston-Salem Cardiology. He listened to Isom’s family history and then he looked at her hands. “I think I know what you have,” he told her. “I’ve only seen it once before, when I was in residency.”

It was Holt-Oram syndrome, a rare genetic disorder that affects just 1 in 100,000 live births. The arm and finger differences in Isom’s family are part of the syndrome. But more life-changing for Isom were the disabilities they never realized they have: congenital heart abnormalities. Isom, it turned out, had a hole in her heart the size of a quarter.

Isom had open heart surgery at Forsyth Medical Center with Dr. Bret Borchelt, who repaired her heart. Her three children underwent genetic testing. The test confirmed that one child, who has only very mild differences to his hands, had the syndrome, and screenings revealed that all three of her children had been born with heart defects. Her youngest son’s defects are severe and limit what he can do.

The whirlwind of events was overwhelming, but getting a name for what she had marked a turning point for Isom.

“One of the hardest things about disabilities or differences, especially if they are rare, is that you feel alone,” she said. She started a Facebook page, Living with Holt-Oram syndrome, just to vent her feelings. To her surprise, people from all over the world began to join her there. “Now it is a support group,” she said. “We have over 1,000 members, and we go on this page and give advice. Imagine you have traditional limbs, and you have this child who has one or both short arms, and you have to teach them basic life skills, but you can’t relate. We give advice, techniques, and tell you what has worked for us our families. We encourage and lift up one another. It has been that light I need to reassure myself that I’m not out here alone.”

As someone with a rare genetic disorder and disability, Isom has a few tips for others in the same situation – and especially parents of children with such a condition.

Having a disability or learning your child has one changes you, Isom said.

“You mourn over it. It does hurt. You had this idea, and it all changes. But then you look at the bigger picture. OK, I can’t do this, but I can do that,” she said. “One of the things in our group we tell people is, ‘I can do everything you can do; it just may look different.’ I was made this way for a reason, and if my reason is to show the world it can be done – then I’m OK with that.”

I’m on the autism spectrum. Here’s what it’s like to be me.

Super “Dad” at home and in the ICU