North Carolina Marine's next battle is taking on his brain tumor

Marine Corps veteran: `I try to make the most of it’
By Cliff Mehrtens

Dwayne Osgood was on the operating room table, a few moments before his surgery.

Dr. Eric Deshaies, a Novant Health neurosurgeon, was preparing to remove Osgood’s malignant brain tumor and wanted to reassure him.

“We’ll get you through this,” Deshaies said. He vividly recalls Osgood’s response.

“He said ‘I’ve seen my life pass in front of me before, so I can go through this without a problem,’” Deshaies said.

Osgood, 39, made it through the intricate surgery, just as he did combat duty in the Iraq War as a captain with the U.S. Marine Corps (2005 to 2010). Osgood served two nine-month deployments during the war. 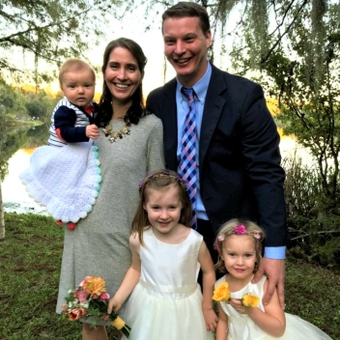 The procedure, and ongoing cancer treatment, have extended Osgood’s life. He and Deshaies struck up a relationship of sorts, based on their leadership duties – Osgood in the military and Deshaies in health care. Deshaies is hoping to have Osgood speak to medical professionals about leadership.

Veterans make up a considerable number of patients being treated. On any given day, 1 out of 10 hospital patients at Novant Health is a military veteran.

Osgood, an upstate New York native who lives in Charlotte, North Carolina, is battling glioblastoma, an aggressive brain cancer that can spread quickly. The American Cancer Society estimates that in 2019 nearly 24,000 Americans will be diagnosed with malignant brain or spinal cord tumors, and nearly 18,000 will die.

Osgood realizes that his time in limited, and he’s making every day count.

Last February, migraine headaches and a sick feeling landed Osgood in an emergency room, where he received a CT scan. The test revealed a sizable brain tumor (six centimeters by four centimeters) in Osgood’s inferior parietal lobule, an area near the back of his brain. A tumor there can affect vision, speech, as well as the interpretation of sensory information –  for instance, not being able to determine if someone is happy or sad.

“I knew almost nothing about those cancers,” Osgood said.

Following surgery, Osgood underwent radiation therapy. He is currently undergoing chemotherapy via pills. He takes the medication for five straight days, then has 28 days off before the next cycle begins.

Cancer hasn’t slowed Osgood down a whole lot. In late October, after intense training, he ran in the Marine Corps marathon in Washington, D.C. He works as a financial analyst for Sonic Automotive, and he and wife Elizabeth stay busy with their children Olivia (7), Eleanor (5) and Paxton (15 months).

Deshaies said that patients with glioblastoma who had no treatment usually live about an additional two months. If they have surgery and radiation/chemotherapy, a few years ago they could survive about six months. Now, with medical advances, that can stretch to two years, Deshaies said.

“It’s kind of a wait-and-see game,” Osgood said. “Honestly, every three months is how I gauge life right now. That’s the time between my scans.”

“At first I felt like I was way too young. I have three young kids, but now I know I have a shortened time span. So I ask myself what I’m going to do with the time I have. I try to make the most of it because I don’t have time for any other junk.”

“He’s doing extremely well,” Deshaies said, referring to Osgood. “A lot of that has to do with his family.” 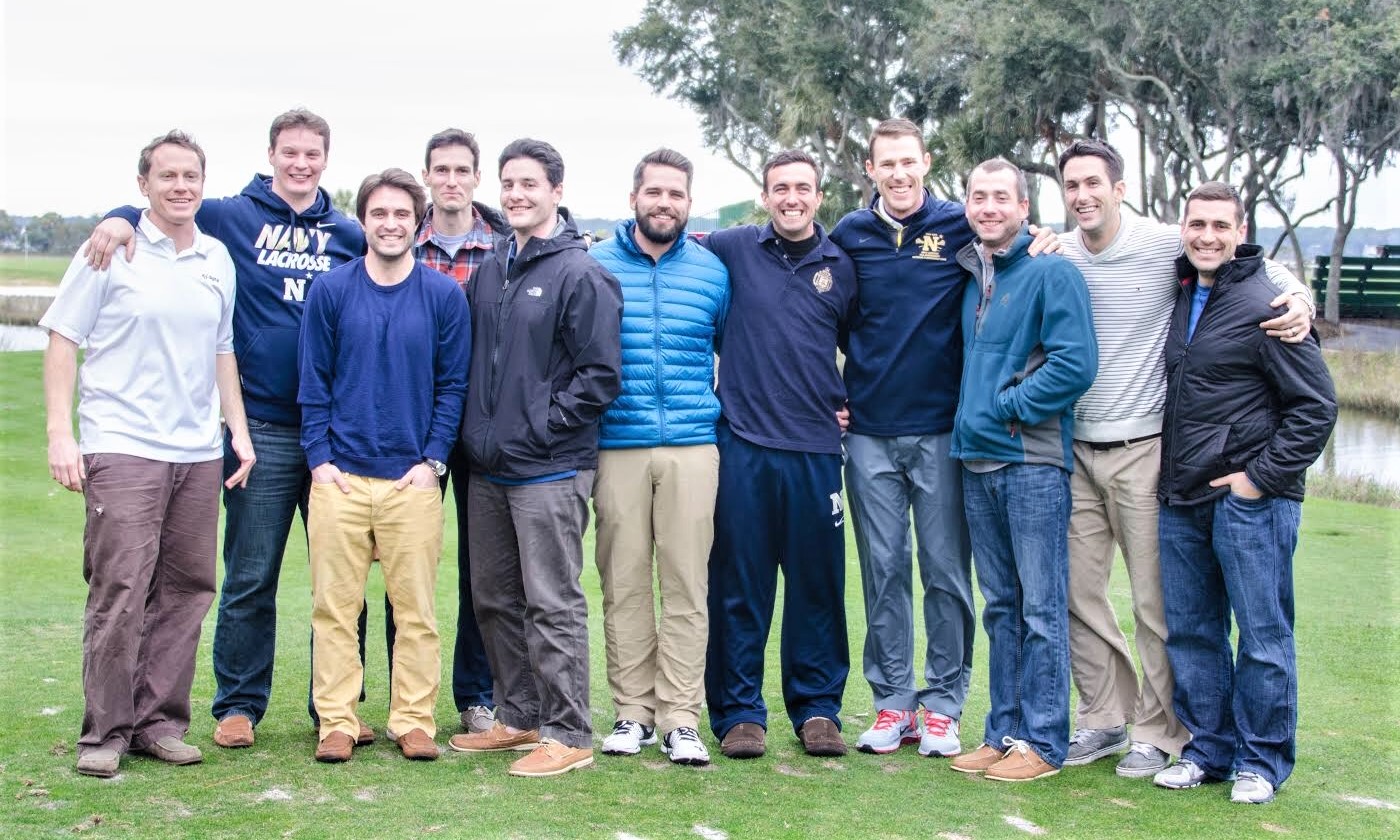 Dwayne Osgood (second from left) and his former lacrosse teammates at the U.S. Naval Academy.

Osgood credits his wife Elizabeth, saying “she’s my rock. She doesn’t let me have down days.” They’ve been married since 2007, and met at the U.S. Naval Academy, where Osgood was a lacrosse player and Elizabeth was a cross-country runner. She spent 10 years in the Navy.

He said the family tries to maintain a sense of normalcy, and to spend more time together and talk more.

“Getting killed is something that happens,” he said. “You realize it’s factual. It was the same when I got the (cancer) news. It happens.”

Deshaies, in getting to know Osgood, learned of his leadership role as a Marine captain, where he directed a company of about 130 Marines.

“At that time, a military police company was a hodgepodge of people, but we had tasks and we had to be a cohesive unit,” Osgood said, referring to his Marines. “One unit tied to one mission. There’s the same sort of dynamic at a hospital.”

Said Deshaies: “We talked about leadership. We (Novant Health) have so many people with different backgrounds, cultures and beliefs. The question is how can we bring those together to reach the same vision. The military does well with that. I am impressed with his attitude. He led men and he fought for our country.”

3 Marine generals had pain — their doctors had answers