With Memorial Day around the corner, Roland Bibeau, president of Novant Health Matthews Medical Center, is reflecting on how his time in the military shaped his career trajectory – and his life.

After graduating high school in 1974, Roland Bibeau joined the Air Force at 18.

“I knew I wanted to be a medic,” he said. “I wanted to fight the war in Vietnam in a different way, and that was to create wellness and heal our troops.”

His first time on a plane was the flight from his home in Rochester, New Hampshire to San Antonio for basic training.

Bibeau endured the 12 grueling weeks of basic training and went on to complete an additional three months of medic training. Bibeau felt entirely prepared for the job he felt called to do: help and heal others.

‘As close as I wanted to come to war’

He spent four years at Scott Air Force Base in Illinois where he cared for wounded service members in the emergency room. At times the sights, sounds and stories could be tough to take in.

“As an 18-year-old, to see what war did to the human body and how it challenged many of our troops … it was surreal,” said Bibeau. “It was as close as I wanted to come to war.” 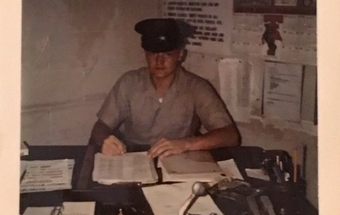 In 1980, after six years of service, Bibeau left the military to pursue a nursing degree. He was honorably discharged to active reserves as a staff sergeant with four stripes.

By his side was Louise (Lu), an aircraft electrician turned surgical tech who had stolen his heart. The two met in the operating room at Scott Air Force Base in 1977 and, as Bibeau says, “the rest is history.” The pair has been together 42 years now.

‘I want your job’

After receiving his nursing degree from Allegheny College in Pittsburgh, Bibeau accepted a position as an ICU/cardiac critical care nurse at Mercy Hospital in the city. Four years later in 1984, he and Lu moved to Charleston, South Carolina where they would continue their career as nurses.

A few jobs and a few states later, Bibeau found himself the director of surgical services at AdventHealth (formerly Adventist Health System) in Florida. He built the health system’s ambulatory surgery center, managed the cardiac cath lab, and went on to manage two of the 40-bed medical/surgical floors.

Bibeau’s boss, Bob Dodd, saw something special in him. When Dodd asked him where he wanted his career to go, Bibeau answered: “I want your job!”

He meant every word.

‘We’re in this together’

That dream was realized when Bibeau was named president and chief operating officer of Novant Health Matthews Medical Center in 2008. He remembers this moment as the pinnacle of his career.

The military influenced every aspect of Bibeau’s life and leadership style, instilling a sense of teamwork and community woven together by a common purpose: healing and caring for others.

Every year, Matthews Medical Center hosts a veterans’ breakfast and communitywide celebration to remember and honor the brave men and women who lost their lives serving our country. This will be the 15th year of the tradition.

“This day is very special to me and the whole team at Matthews,” Bibeau said. “It’s a day for us to pause and remember the sacrifices others have made for us.”

The event also recognizes local fire, police and EMS workers for keeping the community safe, and recruits local high schools like Sun Valley and Butler for patriotic performances and a presentation of the colors by JROTC cadets.

Matthews Medical Center has partnered with the American Legion, the VFW and Veteran’s Bridge Home to bring veterans to the event and honor them with a breakfast. Each year more than 75 veterans fill the community room at the hospital to share stories.

When the tradition started in 2005, there were veterans from WWII and beyond in attendance. Today, although most WWII veterans have passed, the event continues with veterans from wars in Korea, Vietnam and Iraq.

True service to others – whether it was for his country, patients or community members – is what gets Roland Bibeau out of bed every day.

“To be a veteran, you are part of something much bigger than yourself,” Bibeau said. “It’s no different in health care. We’re in this together.”

Please join us at Novant Health Matthews Medical Center for a Memorial Day celebration on Thursday, May 23 at 10 a.m. The event will be held on the hospital lawn at 1500 Matthews Township Parkway in Matthews, North Carolina.

‘Thank you for your service’