Just as Americans were breathing a collective sigh of relief over the distribution of COVID-19 vaccines, we heard reports of a new – more contagious – strain of the virus in the United Kingdom. And in the days since, it’s been discovered in a few American states.

The obvious question: Does this new strain render the vaccine ineffective? 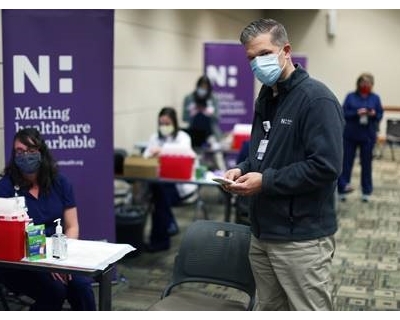 “Once you start to understand how the vaccine works, you realize that it is incredibly safe and incredibly exciting,” said Dr. David Priest, Novant Health’s chief safety, quality and epidemiology officer. “For those of us in health care, it is a real game changer.”

“We don't have any evidence that current vaccines that are rolling out will not be effective against these strains,” said Dr. David Priest, Novant Health’s chief safety, equality and epidemiology officer. “It doesn't mean in the future that vaccine adjustments wouldn't have to be made as we do with flu vaccine every year. But right now, the evidence is that our current vaccines will be protective against these strains as well.”

Priest also noted that it’s not uncommon for RNA viruses to mutate and that scientists and physicians expect it.

Former Food and Drug Administration Commissioner Dr. Scott Gottlieb has done a recent series of interviews, in which he affirms that – for now – there’s no evidence that the new strain (or strains) will be resistant to the current vaccine. He told CNBC on Dec. 21 that the new variant “doesn’t seem to have mutated the surface proteins of the virus in a way that they would slip past our vaccines or prior immunity.”

Gottlieb, a board member of Pfizer – maker of one of the COVID vaccines to earn limited FDA approval – has also said the mutation we’re now seeing in the U.S. doesn’t seem to be deadlier than previous variants during the pandemic.

Here’s what else we know from the Centers for Disease Control (CDC), so far, about this new, more contagious strain:

Keep masking – and guard against misinformation, too

The new strain isn’t a reason for increased panic. But it should serve as a reminder that we cannot let our guard down.

“It will take time to vaccinate everyone against COVID, we must keep adhering to tried and tested measures that keep … us safe, said WHO Director-General, Dr. Tedros Adhanom Ghebreyesus. That means maintaining physical distance, continuing to wear face masks, frequently washing your hands and avoiding crowded indoor places.

One thing that has been shown to spread even faster than this virus is misinformation.

Protect yourself from it as faithfully as you protect yourself from the virus. Consult trusted sources, such as Centers for Disease Control and Prevention, WHO and the Food and Drug Administration (FDA). Here’s an example of five false claims about vaccines.

In horror films, the good guys ultimately prevail and the bad guy gets what’s coming to him. By following commonsense precautions and getting the vaccine when our turn comes around, we can overcome COVID-19, too.

What to expect after getting the COVID-19 vaccines