Read this and then put your phone down

4 reasons to give your device a rest
By Greg Sullivan

It's time to give the phone a break and tune into the world around you, said Dr. Maripat Moore, a psychiatrist with Novant Health Psychiatric Medicine in Kernersville, North Carolina. “Screens really do get in the way and can affect your eyes, sleep and even your psyche. You can't have a face-to-face conversation if there’s a screen between you and the other person. Not only unplugging for just a day is a good idea, but if you try it, also try going outside for 30 minutes, if you can.” 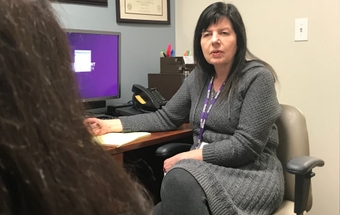 No one's asking you to give up the phone. But Moore has advice on how to set healthy limits.

Many of us sleep with a phone on the nightstand. Moore said we should at least consider putting the phone on a “do not disturb” setting at night and to use an evening-screen setting to make the phone easier on their eyes, if you must use it. Avoid using electronics an hour before bedtime if you can, she said.

“The blue light from screens can energize you and it will actually keep you from sleeping,” said Moore, who sets her own cellphone to block notifications while she sleeps.

There are free apps, such as the free SelfControl app for iPhones, that block distracting sites. Turning off Wi-Fi might also help some avoid the temptation of mindlessly scrolling. "So that you're not online all the time and can give your eyes a break here and there, try to only go online when you choose to go online,” Moore said.

Try giving yourself a 30-minute window each day where you can check in, rather than just jumping on and becoming distracted, she added. And don't get caught up in people’s photos.

“As human beings we're insecure and we're constantly comparing ourselves to others,” Moore said. “And people usually show only their best photos on Facebook and Instagram and it kind of hurts your self-esteem to see that. It's actually better for your psyche to limit your time looking at other people's lives.”

Moore also suggests muting notifications and checking them periodically rather than reacting each time you’re pinged. Ask yourself: do you really need to be constantly checking work email when you're off the clock?

One way to foster screen-free time when in group settings is to make it a game.

“I love the idea that if you go out to dinner with your friends and everyone takes their cell phones out and puts them in the middle of the table, that the first person who picks up their phone has to pay for dinner,” Moore said.

Moore, who sees both child and adult patients, said using limits can work for both kids and adults. For kids, Moore suggests incentives like finishing homework before using electronics, and, as with adults, not allowing them to use electronics right before bed to help with sleep.

“I see child patients whose parents don’t allow them to use electronics during the week and only on weekends and Saturday is free-for-all for electronics,” Moore said. “Change is a very difficult thing to do. And when parents who haven't set limits start to set limits they're going to see an increase in behaviors and increasing tantrums. But as long as you're consistent things do improve."

To schedule an appointment with a provider, visit Novant Health’s physician finder.