'I was fighting for my life'
By Cliff Mehrtens

Beth Masny works in a hospital where her daughter was attached to a ventilator for 12 days. She couldn't visit, and only twice passed by the door. A few feet inside, Jessica Simone's life hung in the balance.

“I’d peek in through the glass, but my heart was just breaking,” Masny said.

Simone was the first COVID-19 patient who needed a ventilator at Novant Health Forsyth Medical Center in Winston-Salem, North Carolina. Masny had the frightening dual role of mother and nearby worker because she’s an EEG (electroencephalogram) technician at the hospital.

She could see her daughter, but she couldn’t help her.

Social distancing prevented anyone except specific health care workers from being near Simone, or any COVID-19 patients.

Simone, 34, was hospitalized for two and a half weeks because of coronavirus. Her first clue was stomach distress. Then a slight fever and a dry cough, which she thought might be spring allergies. Simone felt well enough for a cross-fit workout, but the next day “something didn’t feel right.” Her fever hovered near 100 degrees and a cold feeling developed in her chest.

Simone went to the Novant Health Forsyth Medical Center emergency room, where she was given anti-malarial medicine and sent home, along with instructions to use her inhaler (Simone has asthma). The next night, still feeling bad, she went to the emergency room of a different healthcare system, which agreed with Novant Health’s treatment.

A day later, things escalated. Her son celebrated a new trampoline in the yard, but Simone was too weak to leave her bedroom.

After several tests in the emergency department at Forsyth Medical Center, Simone was admitted and whisked to intensive care. She spent two days in the ICU before being placed on a ventilator, and remained there until the final three days of her hospitalization.

“I have no memory of that,” she said.

Simone was besieged by hallucinations and vivid dreams throughout her hospital stay, both while on and off the ventilator. Sometimes, she unknowingly yanked out the tubes attached to her body as the virus tightened its grip. She needed restraints and sedation medicine.

Simone was on oxygen initially, but her conditioned worsened. That’s when she was transferred to a ventilator, to help her lungs function.

“I was fighting for my life,” said Simone, who worked nine years as a paramedic and is a nursing student at Winston-Salem State University. “I didn’t understand what they were doing to me. I felt like I was trapped in a box. And why were they wearing space suits?” 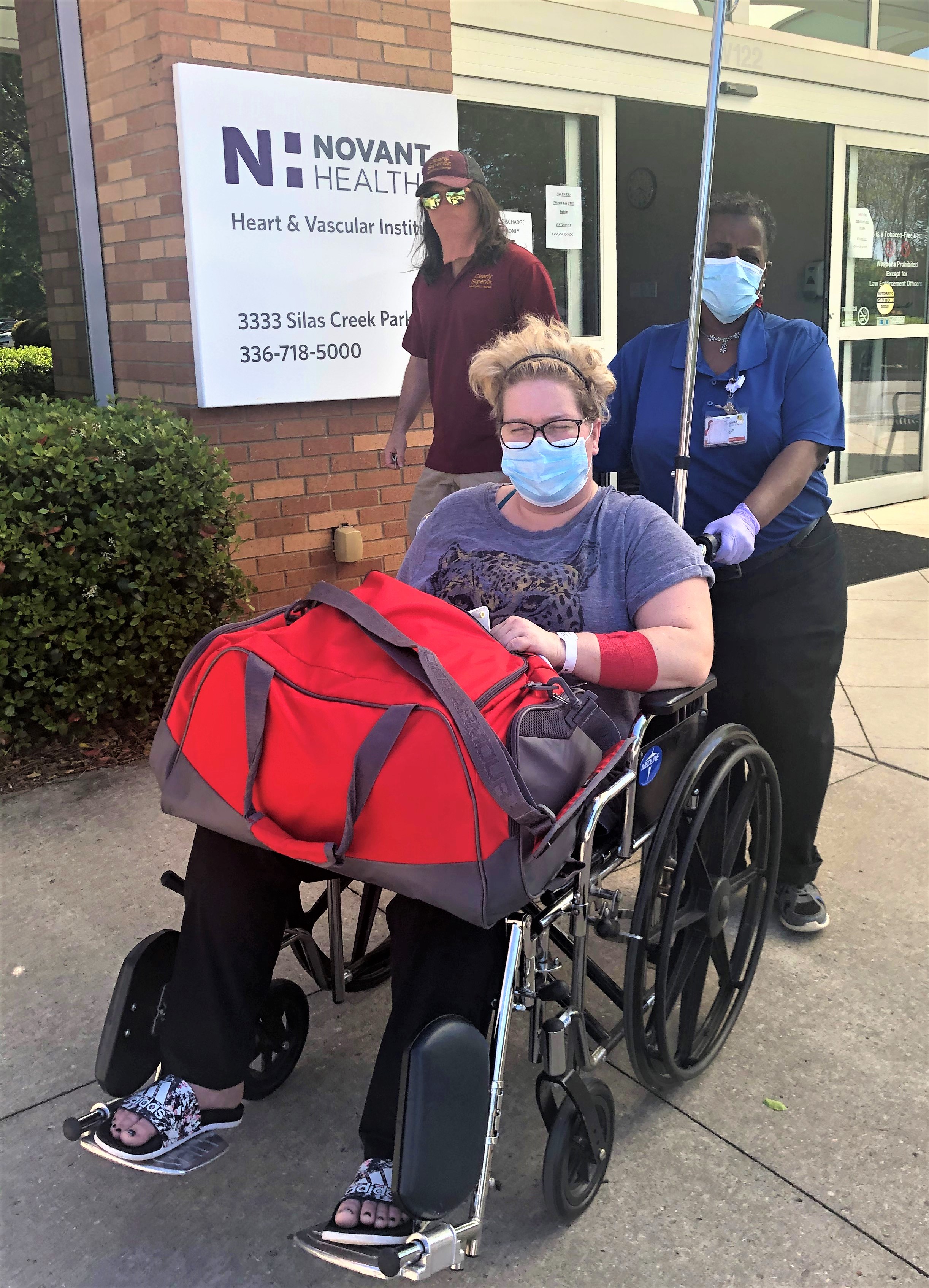 Jessica Simone during her release after two and a half weeks in the hospital.

Simone was seeing doctors, nurses and technicians in face shields, eye protection, masks, gloves and gowns. That personal protective equipment (PPE), along with social distancing and visitor limitation, is vital to prevent the spread of COVID-19.

Simone was among the first wave of COVID-19 patients in North Carolina. Various tests revealed that many of her variables, including white blood cells, red blood cells and platelets, fluctuated when she was in the hospital. It forced medical staff to try different treatments and be flexible.

“I’m a paramedic and firefighter, so I knew it wasn’t a good situation,” said Mike, Simone’s husband. “I felt helpless, especially with the restrictions on people visiting the hospital. We couldn’t see her, so we were completely dependent on the information we received. I knew it was a bad situation a couple of times.”

And for nearly two weeks, Masny couldn't go inside her daughter's room. A couple of times, she stopped briefly to glance through the door window.

“It was terrifying not being able to visit,” she said. “I just wanted to go in and hold her hand. You really feel lost and scared.”

Recovering, against the odds

Simone’s health improved enough to remove the ventilator and she was released from the hospital April 9. She could barely stand or walk, and had trouble feeding herself after being idle during treatment. 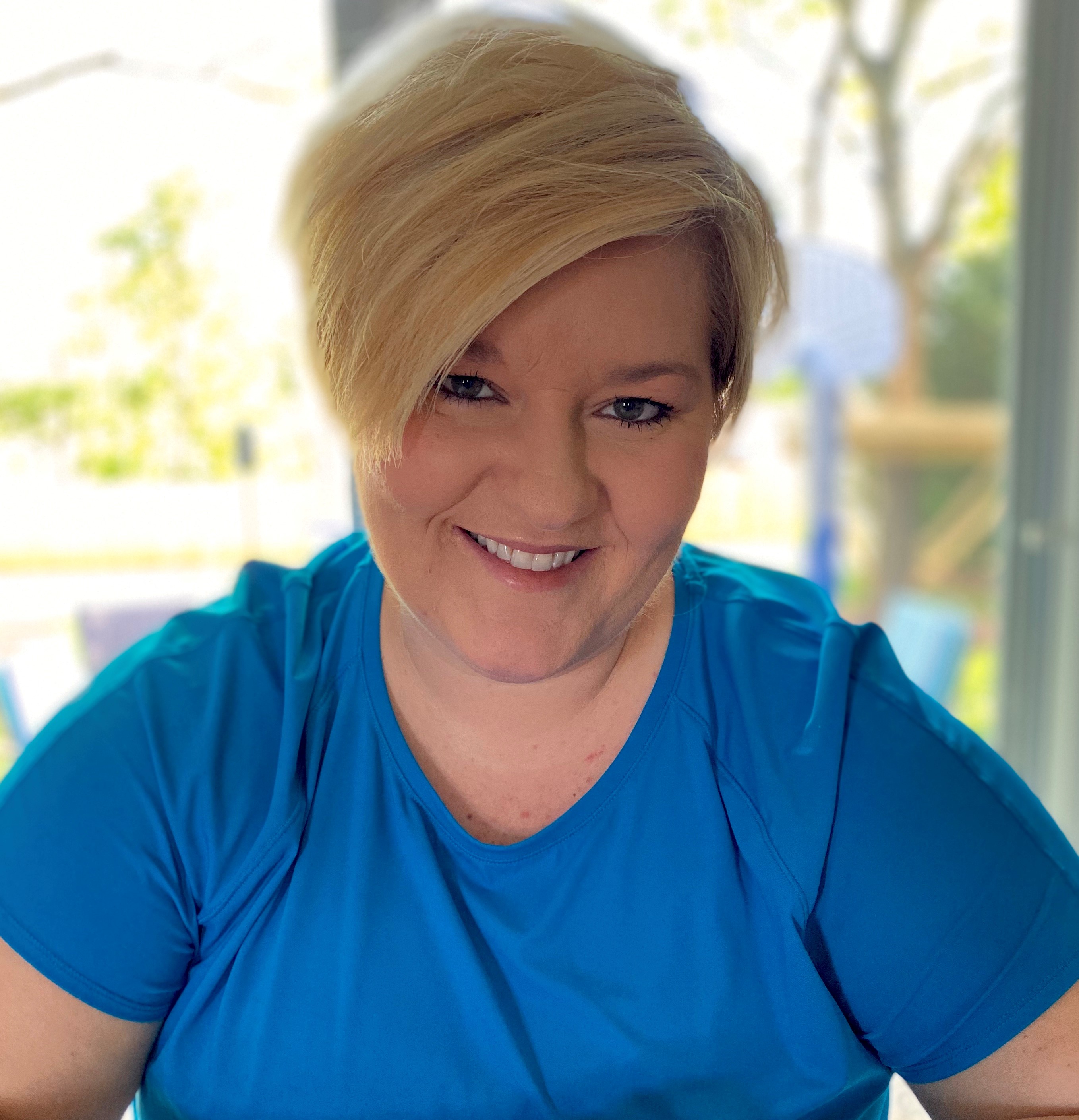 Simone said she can walk across the street, but not up a flight of stairs, as she slowly rebuilds her stamina. She lost 30 pounds during the hospital stay. Her chest X-rays are improving, but doctors aren’t sure yet if there will be permanent damage. She’s wearing a heart monitor for a month and said breathing “hasn’t bothered me much.”

Masny was able to talk with Simone remotely through FaceTime after the ventilator was removed.

“It was great to hear her voice,” Masny said. “She’s a strong girl and she’s working through her problems, but we don’t know how it will end.”

Simone admitted she’s “not very good at being laid up,” but understands her recovery will take time. She also realizes she defied the odds.

“There’s no reason to think I’d pull through,” she said. “I feel really blessed. I remember thinking ‘God, if you’ve got anything left for me, I just want to see my family again.’”

Novant Health team members are on the front lines in the battle against the COVID-19 pandemic. Novant Health Foundation has established a new fund dedicated to supporting our teams, as well as the overall response to the pandemic. Contributions will support team members and help fund testing and medication to support patient care, as well as medical supplies. To donate, click here.

Find out how you can help.