Cheerleader Hannah Teller was injured recently at a basketball game when a teammate, playing the role of “flyer” on a sideline stunt called a basket toss, accidentally elbowed Teller’s head.

The pain for the West Davidson high school junior wasn’t immediate, but Teller soon realized there might be a problem. “I just shook it off at first because that’s not the first I’ve ever been hit during cheer,” she said. “But after the game my head started hurting pretty bad, so I went to my athletic trainer.”

Sydney Cox, West Davidson’s certified athletic trainer, is part of a program where Novant Health athletic trainers are embedded in schools in Davidson County, North Carolina to care for student-athletes. Cox said she knew then that there was a chance of a concussion.

Teller’s case highlights the difficulty of diagnosing women with concussion in some cases. The complicating factor: women are more likely to have migraine headaches. Those symptoms can be similar to concussion, thus complicating the diagnosis.

Women are three times more likely than men to suffer from migraines (18 percent compared to 6 percent) and the probability for women is even greater during reproductive age.

In Teller’s instance: She had a history of migraines dating back to second grade and had actually had one earlier that day.

Proceeding with caution, Teller’s Novant Health care team was able to get her diagnosis nailed down and take the appropriate steps before getting her back on the court to finish out her season with the Dragons cheerleading squad.

Taking stock of the situation 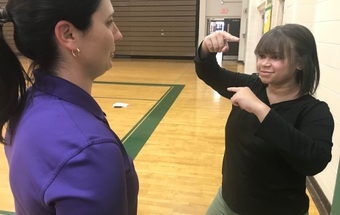 Cox said it’s important for athletic trainers to test athletes for concussions when the possibility exists and follow the adage of “when in doubt, sit them out.”

But it’s also important, she said, to be aware that concussion symptoms don’t always present immediately. It can take as long as 48 hours after the injury for symptoms to become evident.

In Teller’s case, it wasn’t an obvious concussion based on Cox’s initial check but she told Teller not to participate until they could be sure.

The Centers for Disease Control and Prevention defines a concussion as a “type of traumatic brain injury caused by a blow, a bump or jolt to the head or a hit taken to the body that causes the head and brain to move rapidly back and forth.”

It’s important to know whether or not an athlete has a concussion because if they return to play before their brain has fully healed they are at risk for repeat concussions, which can lead to long-term problems.

Student-athletes who may have a concussion might complain of the following symptoms:

“With Hannah, she had a headache and she felt pressure in her head, but she knew she had migraines, Cox said. “She vomited on the way home, but that’s something that she also has happen with her migraines. It’s the same area and they can have the same symptoms.”

The day after the game, Teller came back to Cox and said she still had a headache, but Teller expressed that she could confidently tell that she was having a migraine based on the way it felt. The question at that point was whether it was only a migraine or a migraine and a concussion, too.

Because it was during the holidays, Teller went home for a couple of days and rested — but the headache lingered. At that point, Cox was confident Teller had a concussion.

Cox made an appointment for Teller with Dr. Patrick King, a sports medicine specialist at Novant Health Orthopedics & Sports Medicine in Thomasville. Like Cox had done, King performed a series of tests known as VOMS (vestibular/ocular motor screening) that track eye movement and screen for concussion.

“When you put it all together it just looked like a concussion from the standpoint that her migraines felt different to her and she had fatigue and energy issues, which are not usually the main symptoms with migraines. You may have these symptoms during the migraine, but they should not follow a migraine,” King said. “The majority of migraines should resolve and concussions will be persistent. She was a week out and still had a headache. It was a mild headache that felt different than her migraines, and migraines typically aren’t mild.”

Getting back on the court

After diagnosing her with a concussion, King instructed Teller to get plenty of rest, limit her screen time and not do anything that makes her feel uncomfortable on returning to the classroom. (For some athletes that could mean wearing sunglasses to school or wearing a baseball cap to block light.)

King also highly encourages athletes recovering from concussions, if they’re able, to observe practices with coaches so they continue to feel part of the team to help avoid depression.

Teller would also need to get cleared by King to return to play, which is also a state requirement. After a few weeks of her teammates cheering for her recovery, Teller was cleared by King and back cheering on the Dragons.

“I was definitely upset I had to sit out at first, but when I got back I was really excited,” Teller said. “I felt good again and they all welcomed me when I came back.”

Concussions are a lot trickier than you might think