Carrying Memorial Day in their hearts and hard work 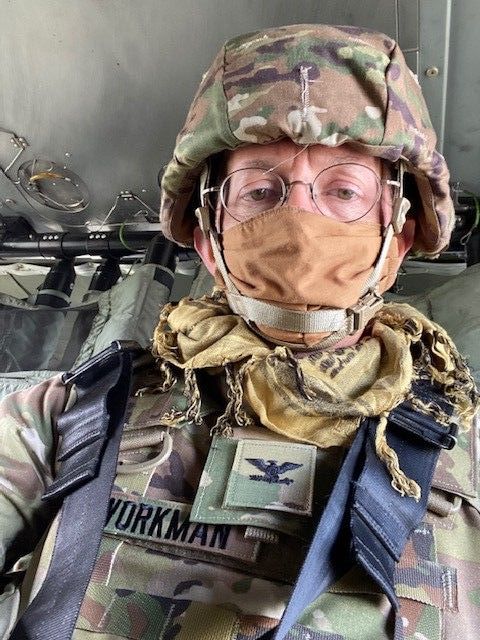 Dr. Ray Workman won’t be celebrating Memorial Day this year at a local remembrance or firing up the backyard grill.

Instead, Workman, a vascular surgeon with Novant Health Vascular Specialists in Winston-Salem, will spend the holiday at his second job – as a colonel in the U.S. Army Reserve, stationed at a remote forward operating base in Afghanistan.

“We will likely discuss what it means to each of us and raise a nonalcoholic beer to those who have gone before us and given their lives for our freedom,” Workman said of his holiday plans. “But our routine will not vary much, as our mission is 24/7.”

Workman is just one of many U.S. military veterans on the Novant Health team – men and women who honed their skills in service and sometimes combat. That military experience, they say, is serving them well as they care for patients and assist the organization during the battle with COVID-19. And it’s given them a special appreciation for Memorial Day, which honors men and women who have died while serving in the military.

Never let them see you stress

Paul Sanford is a trauma response nurse at Charlotte’s Novant Health Presbyterian Medical Center – and a flight nurse with the 156th Aeromedical Evacuation Squadron (see main photo), part of the North Carolina Air National Guard. Both jobs, he said, call for the ability to make quick decisions under intense pressure.

In Charlotte, Sanford deals with injuries caused by anything from a fall from a ladder to a car crash to a stabbing. As a flight nurse transporting an injured service member to a hospital, he typically has no provider on board, so he’s got to be ready for anything.

“We have to know how to solve problems really quickly,” he said. “Air Force Aeromedical Evacuation medicine teaches you to focus on protocol and directives and ignore the emotion of a situation. Showing stress during an emergency is not helpful. We have to be calm and measured.”

Calm and measured – and good at listening. For Vitheary Gil, work as an Air Force information manager translates well to her Novant Health role as a revenue cycle advocate, someone who talks with patients about their bills. “I work very well under pressure and need to be a good listener, because everybody has a story,” Gil said.

Moving fast in the dark

Workman has traded the Novant Health operating room for – well, for just about anywhere. His forward surgical team is a nimble group of five that can perform surgeries in any spare building or even outdoors.

“Our mission is to support Special Operations Task Force troops,” Workman said. “Most of those missions occur in the dark.” When called on for surgery, Workman’s team will travel by air as much as possible to avoid improvised explosive devices (IEDs) planted by roads. “We pray that our skills will not be needed, but when they are we are fully prepared to do life- and limb-saving surgery so our soldiers can return to duty and their families as healthy as possible.”

When you’re surrounded by danger, trying to save a life, nothing matters more than your team. Things may be tamer back home in a hospital, Workman said, but the approach is no different.

“I still depend on all the Novant Health team members to have each other’s backs and stay focused on our mission,” Workman said. “Certainly in today’s world of COVID-19, team member dependability can have an impact on the health of our patients. That is why allowing each team member to speak up if there is a concern … is so important.” 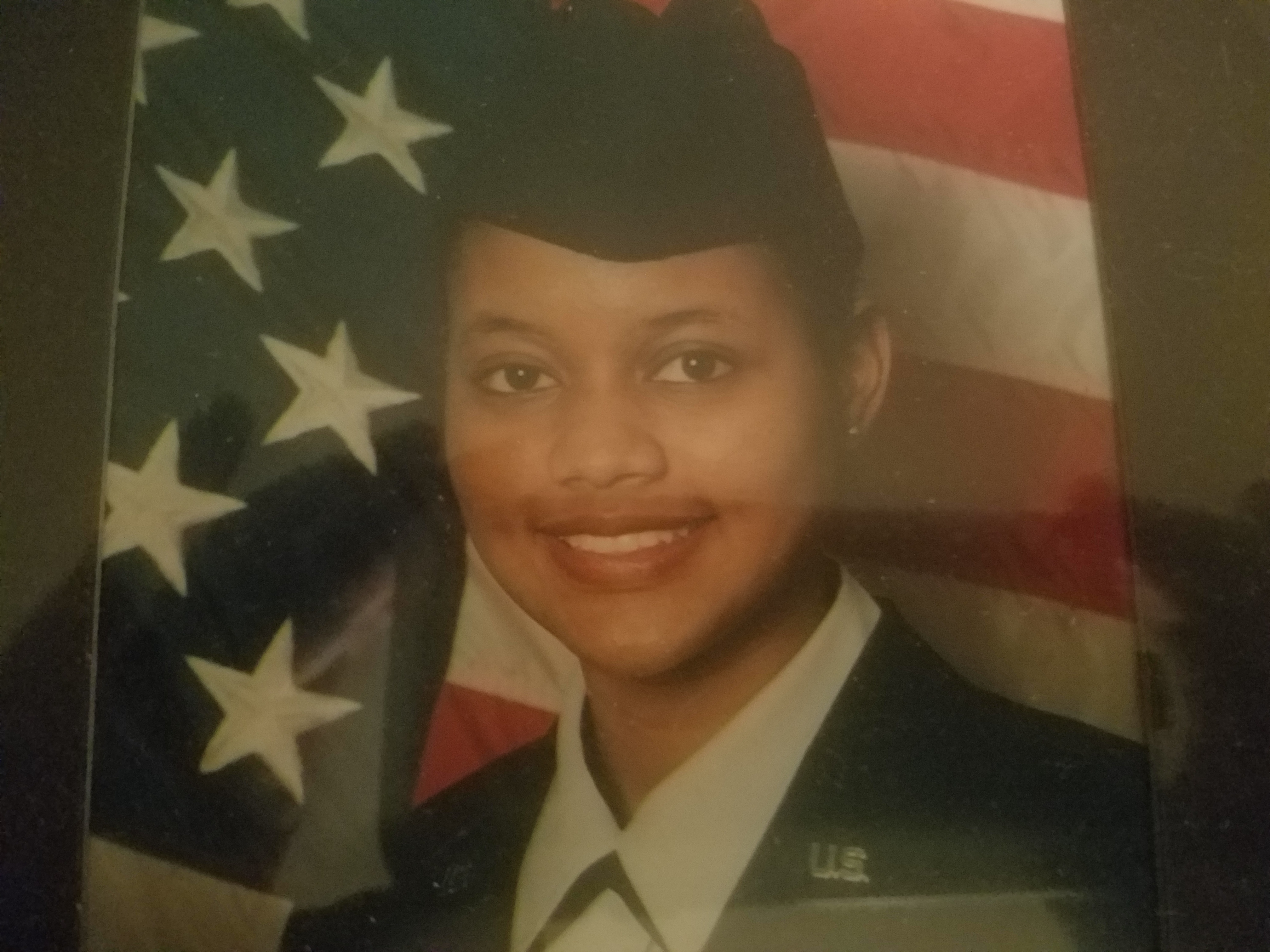 Dreamea Tate is an emergency room nurse at Novant Health Kernersville Medical Center, and has assisted with COVID-19 screening. Her four years in the Air Force, she said, taught her to home in on a goal and ignore distractions. “Staying very focused and disciplined … dealing with the punches as they come,” she said. “Being in the military definitely helped me know how to respond to an emergent situation quickly. I’ve been in situations where I walked in to see a patient who was not doing well and I have to make split second decisions to get the help I need and get the patient to the right level of care.”

Roland Bibeau said his Air Force years were key to his growth as a Novant Health leader. “My military experience assisted with learning what being part of a team means,” he said. “Also, my medic training laid the groundwork for becoming a nurse and, ultimately, president of Novant Health Matthews Medical Center.” 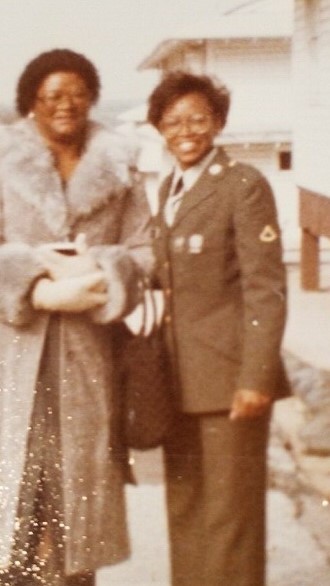 The military taught Vennie Patterson how to read a situation quickly. During 17 years as a lab technician in the U.S. Army and Army Reserve, she did everything from running complex lab equipment in Nuremberg, Germany, to serving at West Point Military Academy Hospital in the run-up to Desert Storm in 1990.

Her flexibility served her – and patients – well when COVID-19 hit the United States. At Novant Health, Patterson normally coordinates cardiovascular screening events in the Charlotte area. But with the pandemic, she’s redeployed as a lab technician in a COVID-19 screening center. “My skills as a field medical lab technician were vital,” she said. “I’ve helped with COVID testing and it’s a great honor to be able to do that.”

Lisa Abrams is responsible for the safety of patients and team members at Novant Health Rowan Medical Center. Each day that she puts on her public safety sergeant uniform, she carries instincts honed through two tours in Iraq and military contracting work in violent places around the globe. 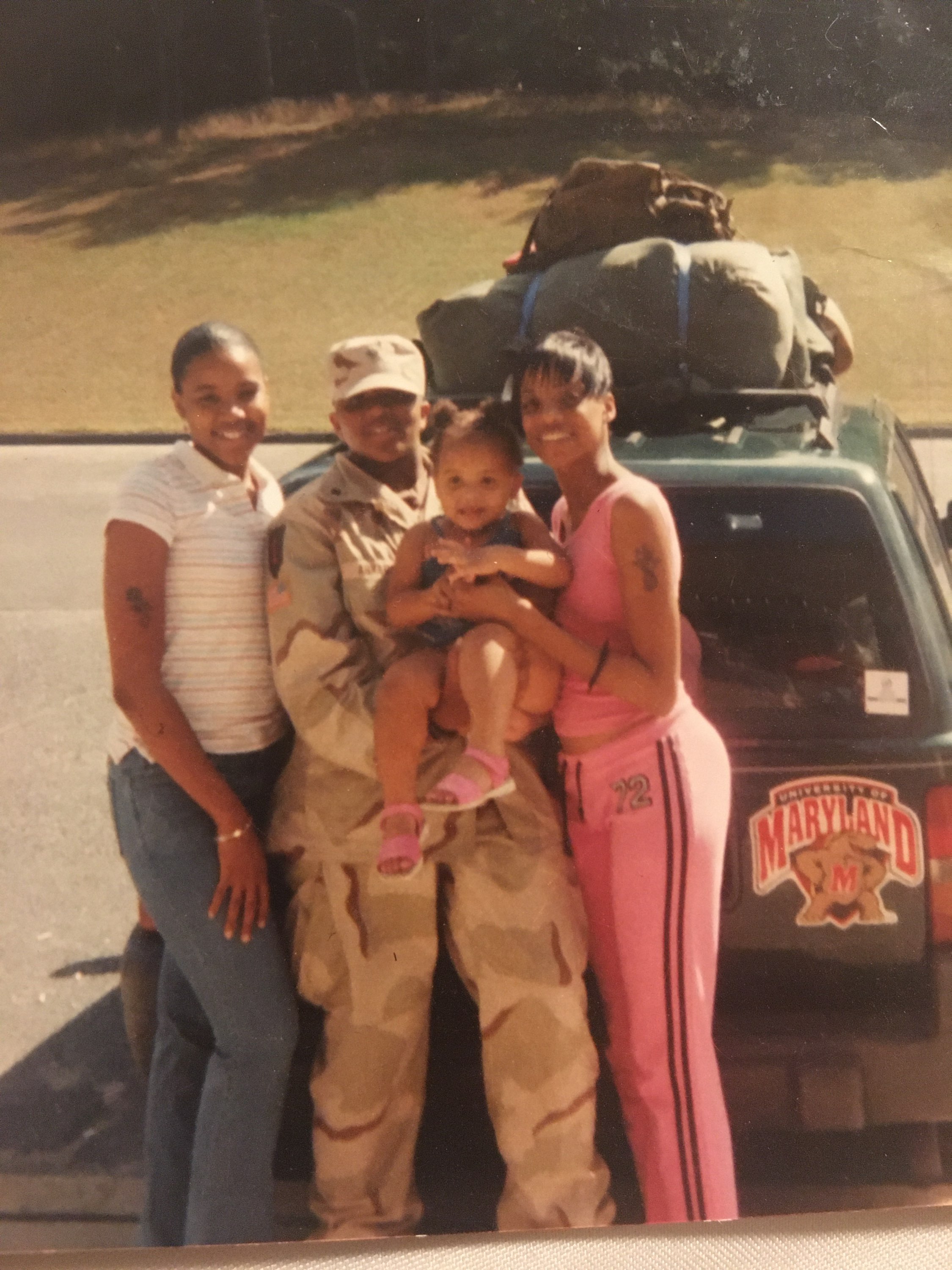 Lisa Abrams in uniform with her sisters

An Army engineer, Abrams was part of a crew that headed out in the Iraqi desert each night to repair roads blown apart by IEDs so convoys could get through. After a security perimeter was set up, she and others would get to work. Then came the tense hours of waiting for the concrete to dry – because otherwise the enemy would bury bombs in the wet cement. Facing small-arms fire was a regular part of the job, and so were life-threatening situations she doesn’t care to detail. Later, as a military contractor, Abrams worked security on U.S. military bases, learning to vet people trying to gain access.

It all helps her today. “I know body language. I have a heightened sense of alertness. Everything kicks in – it’s second nature,” she said.

Memorial Day ‘inside the wire’

Sanford will be working at Presbyterian Medical Center on Memorial Day – and then, a few days later, he’s shipping out to the Middle East (he’s not allowed to say where). His deployment lasts several months, until near the end of this year. The separation is just the latest of eight deployments he and his wife, Carole, have endured during his military career, and it’s partly what makes him hope aloud that Memorial Day will bring a special recognition for military families, as well.

“The family who loses a service member lives with that loss the rest of their lives,” Sanford said. “On this Memorial Day, I wish for people to remember and support families who have suffered loss or trauma to a military member.”

For Abrams, the day is one of reflection. “We remember those who made the ultimate sacrifice,” she said. “(I think of) the friends I lost. The people I know that didn’t make it back.”

Spending his Memorial Day in Afghanistan this year deepens Workman’s appreciation for the sacrifices of military members and their families.
“When I peer ‘outside the wire’ here in Afghanistan, my heart is sad for the people of this land who will never know the freedoms that we enjoy back home in the United States,” he said. “I hope that all Americans take a brief moment to remember that freedom is never free and that many men and women have paid the ultimate price for each of us to enjoy the liberties our great nation.”