Cancer during a pandemic is no match for these women

A hospital chaplain shares her story after being diagnosed with endometrial cancer.
By Josh Jarman

Editor’s note: In the midst of COVID-19, it’s important to remember that people are struggling with other life-threatening illnesses, like cancer. June is National Cancer Survivor Month. And for women recently diagnosed with a gynecological cancer during the pandemic, it’s vital that they stay connected for support.

Katherine Moxley never thought the shoe would be on the other foot. For years, the 62-year-old Winston-Salem native served as a volunteer chaplain at Novant Health Forsyth Medical Center’s Derrick L. Davis Cancer Center, where she worked with her longtime friend Robin Atkinson, a gynecologic oncology nurse navigator.

They loved working together and often rounded on patients as a team in the infusion center. That is until Moxley was diagnosed last year with endometrial cancer.

Endometrial cancer is the most common cancer of the female reproductive organs and occurs when the cells in the inner lining of the uterus or endometrium start to grow out of control. The American Cancer Society estimates that more than 12,500 women will die from cancers of the uterine body in 2020.

“When cancer hits below the belt,” Atkinson said, “many women feel too embarrassed to talk about it. They often think that they have done something wrong and that it is a punishment, but it’s not.”

With Atkinson by her side, Moxley found the help she needed from Dr. Amy Wallace, a board-certified gynecologic oncologist with Novant Health Oncology Specialists, a department of Forsyth Medical Center, in Thomasville and Winston-Salem.

Always room at the table

Moxley grew up in Union Cross, North Carolina. Her mother, a former Hanes Brand hosiery factory worker, would always make extra coconut cake to have on hand in case guests were invited to family dinner.

“We never once locked our doors,” said Moxley. “My parents welcomed everyone in with open arms.”

After high school, Moxley went on to marry her husband, and together they have two children and two granddaughters.

Illness is a challenge

Moxley likes to refer to illness as a challenge to be overcome.

“As a chaplain, you’re dealing with people of all sorts of faiths, beliefs and motivations in life,” she said. “My goal is to respect where they are and try to provide encouragement as needed.”

Before COVID-19, one of the ways she did that is through the Feel Good Friday program. Originated by survivors 17 years ago, Feel Good Friday is normally offered once a month at the cancer center for patients, families and caregivers to share experiences and get pampered for a few hours.

“After I was diagnosed, Feel Good Friday, or Fun Friday as I like to call it, really became something I looked forward to each month,” said Moxley. “I used to walk into Fun Friday to volunteer, but as a patient, they pushed me in on my wheelchair.”

A kick to the gut

Moxley credits her granddaughter’s taekwondo class for saving her life.

“The Friday before my granddaughter’s birthday party, she decided to demonstrate one of her flying jump kicks,” Moxley said. “The kick accidently hit me in my stomach and caused terrible pain.”

Two days later, the pain only got worse and Moxley decided to get examined at Novant Health Clemmons Medical Center, a department of Forsyth Medical Center. After the examination, her doctor suspected something else: cancer.

“I was honestly at peace when they said it might be cancer,” she said. “So long as I kept my faith, I knew that no matter what it was, I’d get through it.” 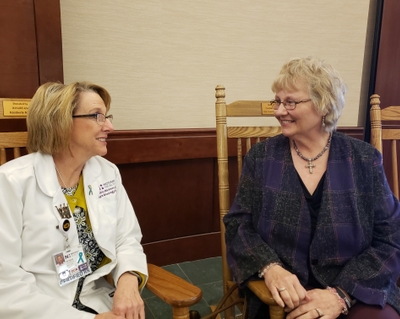 Robin Atkinson (left) and Katherine Moxley have worked together for many years at the cancer center.

Wallace later confirmed the diagnosis as endometrial cancer. The tumor, which started in her uterus, had spread to her ovaries and lymph nodes, and grown to the size of a baseball.

“Endometrial cancer can have symptoms can be vague for a long time,” Wallace said. “Many women confuse warning signs like abdominal pain, with bloating. Vaginal bleeding may also go ignored. This can lead to endometrial cancers getting diagnosed in advanced stages.”

Wallace recommends that all women over 21 get an annual pelvic exam. “Oftentimes women think that after they get through their childbearing years or through menopause, that they no longer need an annual exam, but they do.”

Wallace prescribed a three-cycle chemotherapy regimen followed by surgery. The goal: Shrink as much of the tumor as possible then surgically remove all visible cancer.

The surgery was successfully completed at Forsyth Medical Center in November 2018.

“The chemotherapy took my hair,” said Moxley. “But it could not take my spirit. For me, the hardest part was having to rely on others and not being able to take care of my family.”

That’s when Atkinson reminded her friend that to be a good giver, one has to know how to receive.

As a nurse navigator, Atkinson often works round-the-clock as an advocate for her patients.

“My role is to answer questions and to remove barriers to care during each step of the treatment process,” said Atkinson. “But mostly, it is a position of encouragement.”

One of the ways she does that is through a support group for women diagnosed with gynecological cancers. “Before COVID-19, we used to meet once a month to do an art project, or go see a movie, or have a cook out.” For the moment, the meetings have moved online.

“It’s been a great tool and our gyn cancer support group is stronger than ever,” she said. “Our patients are able to stay safe at home, but are still able to connect and encourage each other.”

After the pandemic, Moxley plans to return to the cancer center to volunteer.

“I’ve learned that no one is invincible,” she said. “It doesn’t matter if you are a nurse, a doctor or a hospital chaplain, anyone can be diagnosed with cancer, even during a pandemic. But we have to see that cup as half full instead of empty, and we have to meet our challenges head on.”

It’s time to end the silence around gynecologic cancer

'Women's health care' means a lot more than you might think