Brain surgery restores life for patient after 18 years of suffering

At 26, Andrea Herath was diagnosed with an inoperable blood vessel abnormality in her brain. It felt like she had been issued a slow motion death sentence. Through tears she listened as her neurosurgeon explained that surgery was too risky because it could result in her being paralyzed for the rest of her life.

But one day, Herath thought, technology would improve and she could be cured. And after 18 years of suffering, that day occurred earlier this year when Dr. Rashid Janjua, a neurosurgeon at Novant Health Brain and Spine Surgery in Winston-Salem gave her reason to hope. 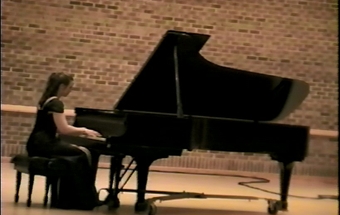 Andrea Herath at her college music recital in 1998.

Herath, now 44, grew up playing the piano at her home in Mount Airy, North Carolina. It was there that she watched her older brothers play and started taking lessons of her own at 5.

“At first, I wanted to play just like my brothers,” she said. “Then I wanted to play like Beethoven and Chopin. When I learn a new piece of music, it just has a way of reaching into my soul.”

She studied music at Appalachian State University, moved to Austin, Texas and started working whatever gig she could land. For years, she worked in live music stage production, studio and live music engineering, concert booking, show merchandizing and even event security. It wasn’t always glamorous, but she was pursuing her passion.

Everything changed after she experienced a bout of vertigo while driving to work in 2001. She was referred to a neurologist who diagnosed her with an abnormal blood vessel in the brain known as a cavernous hemanangioma.

One in 100 to 200 people will develop a cavernous malformation in their brain or spine, according to the American Association of Neurological Surgeons. These abnormal blood vessels can cause symptoms (neurological deficits) such as seizures, headaches, weakness in arms or legs, vision problems, balance issues, and in some cases, eventual paralysis.

Her neurosurgeon advised her against surgery because the hemanangioma was located at the crossroads of her brain’s connection to her left arm and left leg. If something went wrong, she could be paralyzed for life. Over the years, several other neurosurgeons around the country came to the same conclusion.

Meanwhile, Herath’s first symptom manifested in the form of a spasm in her left eye. “For 18 years I felt like people judged me because my eye looked different and would spasm shut all the time,” she said. “I felt self-conscious and I became quite the wallflower.”

For better or worse 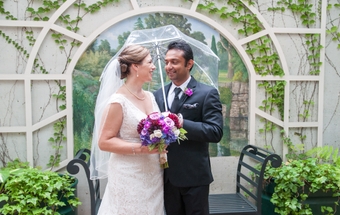 Andrea and Mahesha Herath will celebrate their four-year anniversary in October.

Herath decided to hope for the best. In 2008, while still living in Austin, she decided to go to massage school. “Not being able to help myself shouldn’t stop me from trying to help others,” she reasoned. Shortly thereafter she moved to Mount Airy, North Carolina to be closer to family.

“I felt like God was allowing me to go through this trial to see how strong I am,” she said. “So I kept the faith and I came to the conclusion that sometimes life is just really hard.

Fast forward a few years and her spasms had spread to her left shoulder, arm, hand and fingers. She had to give up the piano and her massage work became almost too painful to bear.

She was at her worst when she met her future husband, Mahesha. On their first date, she was shocked, when after explaining her condition and eventual prognosis, Mahesha did not lose interest. Instead, shortly thereafter, he said he wanted to get married and take care of her.  They will celebrate their four-year anniversary in October. 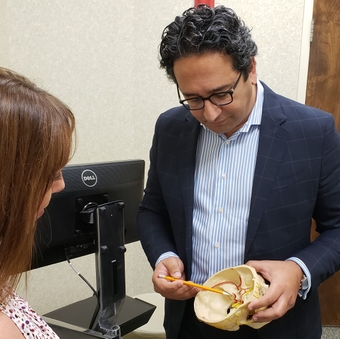 “I just kept praying that someday I would meet the right surgeon who could do it and 18 years later, I found him,” she said.

What would it take to pull off the surgery? “Imagine dismantling an atomic bomb,” Janjua said. “If we messed up, she could be paralyzed for the rest of her life.”

Thanks to advancements in neurosurgery, Janjua said he could remove the angioma through a minimally invasive two-step procedure. The first step would involve using advanced imaging technology to make a one-centimeter incision in the brain through which he would remove the angioma. Imagine this, he said, as taking out a pea embedded in Jell-O and leaving a very small path behind.

As the abnormality was being removed, the second step would be to test her neuro-mapping signals to make sure all motor function messages from the brain to the rest of the body still worked. By using tiny electrical stimulation signals on the brain and measuring the response in her left arm and leg, he figured out which part of the brain controlled each muscle in the limbs. By doing this, he was able to avoid the critically important brain fibers as he removed the abnormality. He also warned Herath that she would wake up after surgery temporarily paralyzed on her left side.

“Similar to hitting your thumb with a hammer and then not being able to move it again for a while, I told her that she could be paralyzed for quite some time on her left side until the swelling went down and her brain sort of woke up again,” Janjua said.

The 6-hour procedure was performed Jan. 8, 2019, at Forsyth Medical Center. Herath woke up paralyzed, as predicted. But her parents noticed something else: her eye spasm was gone.

For the love of music 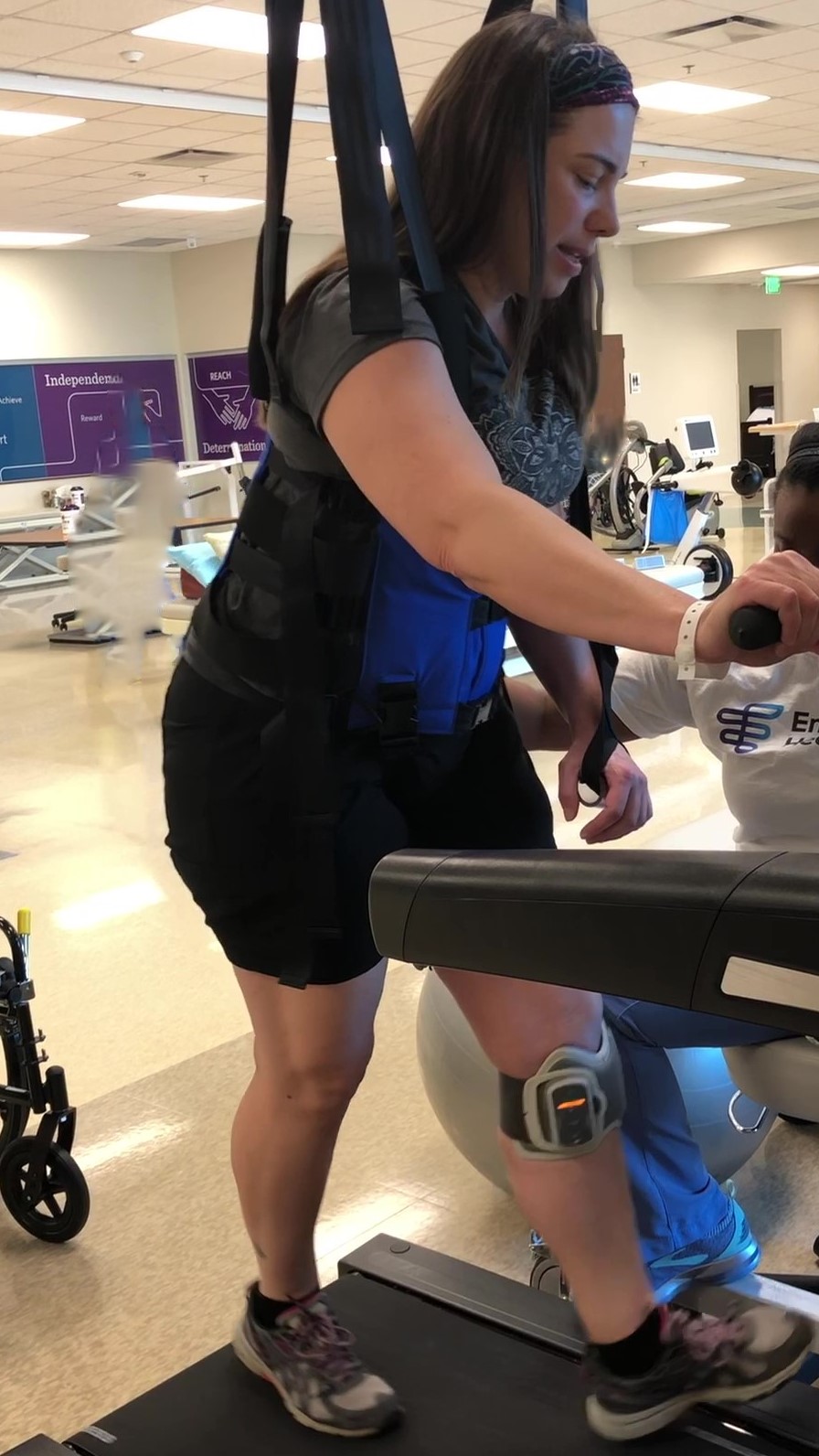 A week later she was transferred to Novant Health Rehabilitation Hospital in Winston-Salem, where she worked with physical and occupational therapists for two weeks to regain strength and motor function.

“All of the therapists that I worked with were great,” she said. “They had a way of encouraging me to work hard with kindness.”

Today, Herath no longer has unbearable pain, spasms or a fear of impending paralysis. And thanks to her continued commitment to outpatient rehab and countless hours each week at the gym, she can walk on her own and move her left arm, hand and fingers.

Janjua believes Herath can make a near-to-full recovery. “She is an amazing individual,” he said. “Even when she was paralyzed, she remained so positive. My hope is that patients realize that thanks to the advancement of technology and the resources we have available at Novant Health, we can treat just about every medical condition right here at Forsyth Medical Center in Winston-Salem.”

Herath has now set her sights on music again. “I have not played the piano in 18 years, but I’m so close and I’m confident that I will play it again soon.”

When it comes to your brain and nervous system, you deserve the best care available. Learn more about Neurosurgery at Novant Health.

‘Get the patient home’