A stunning diagnosis of HIV – and the surprise that followed

'I didn't know anything about HIV...I thought I was going to die'
By Page Leggett

Nicole Dye was a married mother of two. She had no reason to be concerned with HIV. She wasn’t in any of the groups at high risk of contracting the disease.

A few months after her husband took his life in March 2012 – he’d battled depression for years – she was diagnosed with shingles. The following spring, she came down with mononucleosis.

She asked her primary care doctor to run tests. She tested positive for HIV, a virus spread through sexual contact or bodily fluids that affects specific cells of the immune system known as T cells.

“I was shocked,” said the 47-year-old Winston-Salem resident. So was her doctor. “I didn’t know anything about HIV other than what I remembered from ‘Forrest Gump.’ I thought I was going to die,” Dye said.

An HIV diagnosis  is no longer a death sentence, as it was for Jenny in “Forrest Gump.” But the risk of contracting it still exists. Some 1.1 million people in the U.S. are living with HIV today, but roughly 1 in 7 don’t know they are they are infected.

“HIV is a lifetime disease – for now,” said Dr. Michael R. Morgan, an infectious disease specialist with Novant Health Infectious Disease Specialists in Winston-Salem. “But the good news is: It’s easily treatable. Most people living with HIV take one pill a day and should have a normal or almost-normal life expectancy.

"An HIV test ought to be routine for anyone who’s sexually active,” Morgan added. “In our office, we order it just like we do a CBC (complete blood count).”

Dye’s primary care physician (PCP) didn’t think she needed an HIV test – even after her back-to-back illnesses that may have hinted at problems with her immune system. “It’s a stunning, striking example of how people don’t talk about HIV anymore,” Dye said. “I should’ve been tested but my doctor didn’t know that.”

Many PCPs don’t automatically test for HIV, Morgan said. “I tell them to check for it first. There shouldn’t be any stigma attached to being tested for HIV. If doctors make it routine, then patients don’t feel judged. They feel like they’re getting a thorough exam.”

Undetectable in some cases

Morgan helped Dye, whose late husband had had extramarital affairs, understand that HIV is a manageable condition. “He also told me something the HIV community has known for more than a decade,” she said. “If HIV is caught early and you take your medicine daily, you can reach the point where HIV is undetectable in your system.”

And if it’s undetectable, it’s also untransmittable, Morgan said. A July 2018 National Institute of Allergy and Infectious Diseases (NIAID) blog reads: “People living with HIV whose virus is completely, durably suppressed by treatment will not sexually transmit the virus to an HIV-negative partner.”

That’s if they continue to take their HIV meds daily as directed. “Just because you’re undetectable now,” Morgan said, “doesn’t mean you still will be in a month if you miss a dose.”

In 2016, the Prevention Access Campaign launched the U = U promotional campaign, which stands for “undetectable equals untransmittable.”  According to the group’s website: “U = U signifies that individuals with HIV who receive antiretroviral therapy (ART) and have achieved and maintained an undetectable viral load cannot sexually transmit the virus to others.”

Decades ago, people living with HIV had to take a “cocktail” of multiple medications throughout the day. Today, most people take one pill (that contains multiple meds) once a day. And, ART is virtually side effect-free.

It doesn’t take years of ART to reach undetectable status. Dye’s HIV became undetectable within three months of starting the HIV drug Morgan prescribed. Most of Morgan’s patients see him just twice a year for bloodwork. “They’re mostly social visits,” he said. “We talk about kids, vacations – it’s not all HIV.”

Post-diagnosis, life was normal for Dye. But there was one thing that didn’t feel right. “This was my biggest secret,” she said of being HIV-positive. So, on the five-year anniversary of her disease being undetectable – Jan. 7, 2019 – she shared the secret on Facebook. 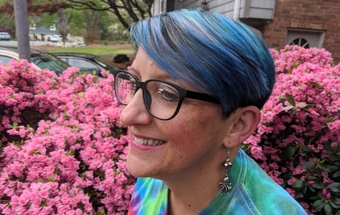 She hopes her openness will convince others who are not in high-risk groups to be tested. “If you’ve had sex, you should be tested,” Dye said. “Even if your doctor doesn’t think you need to be tested, get tested anyway.”

If you test positive, the health department automatically gets involved, Morgan said. “But they’re very discreet. I tell my patients: It’s important to be honest with your previous partners. They need to know and choose if they want to be tested. I also encourage people to disclose to their family and friends.”

In 10 years of practice, every patient of Morgan’s, with the exception of one, has found family to be understanding and supportive, he said.

Family and friends may need to be educated, though. “There are so many misconceptions,” Morgan said. “I invite my patients to bring their spouse or partner in with them to ask questions. People ask: ‘Can we drink out of the same glass? Can we still kiss?’ The answer is yes to all of that. People with HIV can have a normal sex life. They can have children and not necessarily pass it along to them.”

"Dr. Morgan has become my friend,” Dye said of their relationship today. “We basically catch up every six months at my appointments, talking about like, kids, family. He does, of course, answer any questions or concerns I may have and always gets back to me through MyChart when I have questions in between visits. So it's mostly social...but of course we get my bloodwork done."

Dye has educated her inner circle and started an international Facebook group to educate others. She told her 13-year-old daughter about her diagnosis recently and her 20-year-old son nearly two years ago. And she has a boyfriend now who’s aware of her diagnosis. “I’ve had loving feedback from everyone,” she said. “It’s been so freeing to share this secret.”

Find and book the expert Novant Health care you need in seconds.