'This can happen to anyone...to good, hard-working people.'
By Page Leggett

Jody Coln, 42, a CT scan technologist at Novant Health’s Presbyterian Medical Center in Charlotte, battled opioid misuse for six years. He shares his story with the hope of helping others. His team members are fully supportive of his efforts to educate others on the tragedy of drug dependencies and the hope for recovery. There is no shame in talking about the public health crisis of opioid misuse, he said: “Substance misuse is a disease, just like diabetes.”

Jody Coln was in a vulnerable spot. It was 2007, and he was working full time and was a full-time student training to become an X-ray technician. There was never any time for fun, and he lamented to a friend that he missed partying. The friend offered him a pill.

Without knowing how highly addictive hydrocodone can be, Coln took it. And he loved how he felt. “A lot of people just get sleepy from it, but I felt plugged in,” he said. “I was in a great mood, talkative, warm all over.”

He wanted more. The friend supplied it.

When Coln injured his shoulder in 2008 and was prescribed the same thing, he was thrilled. He continued to return to that doctor (who was never affiliated with Novant Health) complaining of shoulder pain he now admits wasn’t there.

“I became friends with that doctor.” he said. “I worked him. My motive was to make sure I had pills. I saw him once a month, and he’d write me three prescriptions and date them two weeks apart.” Each visit netted Coln 90 pills. He was taking seven or eight a day.

During the time he was chasing his next high, he fell in love. Crystal, now his wife, had a 2-year-old and a newborn with a man who “was no longer in the picture,” Coln said. She had no clue her boyfriend, who was so loving to her and her kids, was hooked on opioids.

Fast-forward to 2011. Coln called his doctor one day to make an appointment and learned the office was closing. He was in a full-blown panic: “I was desperate. I knew I couldn’t live without those pills. Food, water and shelter – they all came after pills.”

But he was out of them. There was no way to keep his secret from Crystal anymore. He spent a day writhing in pain on the couch. “My legs wouldn’t stop moving,” he said. “I was sweating. Every joint in my body ached. I was cold and then I was hot. I was nauseated.” He found other sources.

His misuse finally caught up with him in 2012. Someone recommended a treatment center in Monroe. Coln went on short-term disability during the 28-day program. He was able to stop using them for a time but started misusing again when he got news he couldn’t handle.

'Take time to heal yourself'

In 2013, Coln’s dad was diagnosed with stage 4 colon cancer and given two years to live. He began using again.

But this time when he was discovered, he was referred to Novant Health’s Dr. Guangbin Zeng, who prescribed Suboxone, a drug used to manage opioid dependence. Coln called the results “a miracle.”

Shelly Hall, who manages the Novant Health team Coln is part of, was shocked when Coln shared his secret. “He’s always been such a hard worker, very personable, enjoyable to be around,” she said. “I called HR because I wanted to see what we could do for Jody. He’s who you want taking care of your family. He had to be suspended from work to go to rehab, but we wanted him to come back when he was ready. We told him: ‘You take time to heal yourself.’ 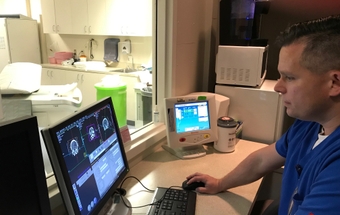 Novant Health CT scan technologist Jody Coln battled opioid misuse for six years. He shares his story with the hope of helping others.

He did. As a result, Coln was able to be there for his dad during his final months. It’s been nearly five years since he used opioids. He takes a small maintenance dose of Suboxone each day.

But it’s not just the medication that helps him be fully present for life. He cites the support he gets from family and colleagues and his faith as reasons he’s able to stay in recovery. “I have a spiritual connection with God now,” he said.

He also praises colleagues at Novant Health. “People would come up to me and say, ‘You look good!’ They were really proud of me,’ he recalls. “They were so supportive, and it was empowering for me to tell them about my struggles.”

Sharing to help others

He’s now adopting the little girls he’s been a stepdad to for more than eight years. And he speaks to others about the dangers of opioid misuse.

He’s shared his story with police officers and prosecutors and does outreach work through Novant Health's opioid stewardship committee. “I’ve never been ashamed to talk about it,” he said. “I’m now a good father, a man of faith and I want to use my story to help others.”

He credits Hall and his team members at Novant Health for their unwavering support. Instead of giving up on Coln, Hall referred him to the employee assistance program (EAP), where he got counseling. And she’s always available to talk to him about how he’s doing. “We probably talk once a week,” Hall said.

Coln still sees Zeng regularly and refers to him as his “accountability partner.” Coln also gets randomly drug tested at work. And he talks about his struggle.

“When I was seeing a therapist through the EAP program,” he said, “I learned how important it is for me to talk. If I get quiet and don’t address my problems, that’s when I can get in trouble.”

Hall said the biggest misconception people have about others with dependencies is that they think they don’t know anyone in similar situations. “We all know someone with a mental health issue, including substance misuse,” she said. “This can happen to anyone. It happens to good, hard-working people.”

She loves supporting Coln in his mission to educate others: “When he told me he wanted to help other people overcome dependency, it brought tears to my eyes. Jody is doing exactly what he should be doing.”

Learn how Novant Health is doing its part as a healthcare partner in our communities to combat the nationwide problem of opioid misuse and dependency.