A different perspective from a different kind of survivor

In October, we talk a lot about breast cancer survivors. Patty Donoghue is a survivor of a different kind.

She had a difficult childhood, part of which was spent in foster care. Her last years in high school put her through a lot. She managed to graduate, but from a non-accredited children’s home.

“Most people don’t pull out of that,” she explains.

But Donoghue was blessed with a few key advantages. For one, she was blessed with an innate optimism that has followed her throughout her life. She also had a few years during junior high and high school when she attended good schools that nurtured her love of art.

“I’d go to a private place and keep up with my art. It made me a survivor,” Donoghue recalls. “I have a strong belief that you keep living and you keep going, and when things get bad, you just have to keep seeing the positive side of life.”

You see that perspective in the art she creates now, including a custom ink painting she created to support the launch of the second mobile mammogram unit through Novant Health Forsyth Medical Center Foundation. The painting, titled “Chasing the Pink Bus,” features a bright pink bus — the new mobile mammogram unit — surrounded by dozens of women running, dancing and cartwheeling toward it.

“The women in the painting can’t wait to get to this pink bus, which is not really what women think about when getting a mammogram,” Donoghue says. “I wanted to give the procedure a different twist because the unit is all about prevention, and that’s such a good thing.”

Donoghue understands the magic of prevention. Before she dove headlong into art, she spent her career in healthcare, rising out of a complicated upbringing to get the education and the job she dreamed of. She started as an occupational therapist and later became a healthcare administrator. It was a time of her life when her art went dormant, except for a few pieces she made for herself. Then, a few years ago, she retired from healthcare and committed herself to pursuing art full time.

“I think for any artist it’s a little scary because you’re very vulnerable. But at some point, you just expose yourself. To be in our space, you have to be bold,” she says.

Donoghue’s work is now part of permanent installations in healthcare buildings and has appeared in more than 20 venues, some of which have been juried by professional curators. It’s also been used to promote events and raise funds for leukemia lymphoma research, suicide prevention and women’s health, among other causes. Her signature whimsical style — a creative expression of Donoghue’s innate positivity — has developed a reputation as art that leaves onlookers smiling, no matter what. 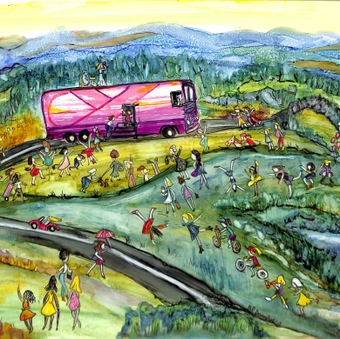 Inspiration for the piece came to her as part of her work with the Women’s Council, which raised the funds needed to purchase this unit. Now, underinsured and uninsured women across the region will have access to mammograms, and mammograms save lives, Donoghue says.

The same has been true of her piece celebrating the new mobile mammogram unit.

In her piece, women aren’t dreading their mammograms, as so many often do in life. They’re excited — flocking to the bus to take advantage of what it has to offer.

“I’ve had survivors tell me they were really grateful for the positive spin on it. Conversations about cancer tend to get so heavy when we’re talking about survival. But we have an opportunity to prevent, and that’s where this came from,” Donoghue says. “Mammograms shouldn’t be something dreaded. It’s prevention, and that’s something to celebrate.”

“Chasing the Pink Bus” will be on display in Donoghue’s solo art show at Footnotes in Winston-Salem through the end of 2019. For Donoghue, it’s yet another chance to show the world that mammograms aren’t something to run from, but rather something to run toward, full steam ahead.

The launch of our second mobile mammogram unit is part of our campaign to increase access to mammograms for women across our region, regardless of their ability to pay. A donation of any amount wil go a long way toward making that goal a reality and turning a dreaded conversation into a positive one. Consider Patty Donoghue our inspiration, showing us the light on the path to prevention. No more excuses. Just more mammograms.